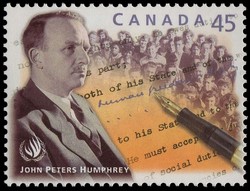 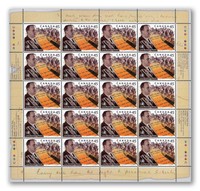 Eleanor Roosevelt called it the Magna Carta of Mankind. Pope John Paul II called it the Conscience of Mankind. Adopted December 10, 1948, the Universal Declaration of Human Rights recognized fundamental rights and freedoms and served as a model for many constitutional documents throughout the world, including the Canadian Bill of Rights and Freedoms. This October, Canada Post will mark the 50th anniversary of that Declaration and honour its New Brunswick-born author, John Peters Humphrey by issuing a commemorative domestic-rate stamp.

The creation of the Universal Declaration of Human Rights was one of the United Nations' greatest achievements. It espoused non-discrimination based on race, colour, sex, language, religion and politics, and sparked a revolutionary change in how international law was practiced by recognizing that human rights are a matter for international concern. Most controversial was its assertion that individuals have a fundamental right to health care, education and work. Though its principles are routinely violated, the Declaration is significant because it has become part of the customary law of nations.

The Universal Declaration of Human Rights was written by John Peters Humphrey, a Canadian born in the village of Hampton, New Brunswick. A product of a tragic childhood in which he lost both parents, Humphrey went on to attend Rothesay Collegiate and Mount Allison University. He eventually transferred to McGill where he obtained a Bachelor of Commerce degree and, subsequently, a law degree. After practising law in Montreal for a few years, he joined the McGill faculty. In 1946, he was offered the position of Dean of Law at McGill but instead chose to take up a post at the UN. Humphrey became Director of the Human Rights Division in the UN Secretariat and was tasked with drafting the Declaration.

Unfortunately, his contribution somehow became obscured and a representative from France was credited as the "Father of the Universal Declaration" and awarded the 1968 Nobel Prize. More recently, however, researchers uncovered Humphrey's draft, typed with his hand-written notations and he was subsequently honoured with a UN Human Rights Prize. In an interview, Humphrey humbly said, "To say I did the draft alone would be nonsense. The final declaration was the work of hundreds".

Humphrey worked with UN for 20 years, overseeing the implementation of 67 international conventions and the constitutions of dozens of countries. He worked in the areas of freedom of the press, status of women, and racial discrimination. Upon retirement from the UN, he resumed his teaching career at McGill. He established the Canadian Human Rights Foundation, founded the Canadian Section of Amnesty International, worked as a director of the International League for the Rights of Man and served as a member of the Royal Commission on the Status of Women. He died in March of 1995, a week after his McGill retirement party.

The stamp celebrates the author of the Universal Declaration of Human Rights. It presents a portrait of Humphrey positioned above an actual page of his draft. A period fountain pen points to the words "human freedom and dignity". A crowd of young people forms the background, suggesting the declaration's impact on the international human rights. The style of the stamp is vintage, reminiscent of the 1940s, yet the layout, design and colour are unquestionably contemporary.