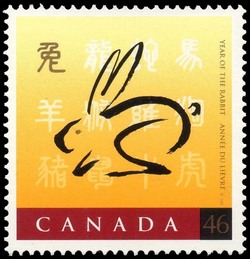 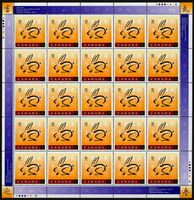 On February 16, the Lunar New Year will begin. This year we enter the Year of the Rabbit. It will be a placid year, or so the legend goes - welcome after the tumultuous Year of the Tiger that preceded it.

The rabbit symbolizes longevity, its white coat peacefulness and cleanliness. In concert with those qualities, the Year of the Rabbit is said to be a temperate year with an unhurried pace; a congenial time in which diplomacy, international relations and politics come to the fore. During these 12 months, individuals are predicted to act with discretion and make concessions. People will become carefree and happy, occupying themselves with recreational activities and entertaining others. Money will be easily made.

Canada Post will once again mark the occasion of the Lunar New Year with a stamp issue. A brush-stroke image of a rabbit is the prominent element in this year's Lunar issue. Its illustrative style reflects traditional Chinese folk-art drawing. The backdrop for the stamp is a yellow gradation representative of the moon. It is complemented by colours often found in Lunar New Year decorations and ornaments - burgundy and purple, creating a sense of celebration and festivity. The names of the 12 zodiac animals are found in the background of the stamp, written in a traditional Chinese style. The word for 'rabbit' is highlighted.

"The approach to this design is a relatively modern one, using a brush stroke illustration style to depict the rabbit, while at the same time drawing a connection to the Chinese culture by writing Chinese characters in the background of the stamp", said Ken Koo, illustrator for the 1999 Lunar issue.

Koo, president of Koo Creative Inc., worked with designer Ken Fung, to develop this issue. Both are Hong Kong natives.

"The overall simple design generates a feeling of cleanliness, harmony and peace. The illustration of the rabbit has a sense of strength and energy to it. When set against the soft background, its style brings more focus to the rabbit itself."

The rabbit is one of 12 animals, often referred to as "earth branches", in the Chinese zodiac. The rat, tiger, dragon, horse, monkey, dog, ox, snake, goat, rooster, and pig are the other astrological creatures. Each year of the Lunar calendar is ruled by one of these creatures and, according to folklore, is said to reflect the personality of its respective animal. Similarly, those born within that year are said to possess the animal's characteristics.

The Lunar calendar has existed for 3,700 years. Unlike the Western calendar which follows the sun, this "lunar" calendar tracks the orbit of the moon. Each of its 12 months begins with a new moon. In a popular Chinese legend, Buddha once summoned all the animals to meet him before he departed from Earth, but only twelve animals came to bid him farewell.

Each year of the Chinese calendar is ruled by one of these twelve animals, representing one in a cycle of twelve years. 1999 is the year of the rabbit. In Chinese folklore, the rabbit symbolizes longevity and is said to live for 1,000 years, turning white at the age of 500. The rabbit ranks fourth in the twelve-animal cycle, symbolizing graciousness, kindness, good manners, sound counsel and sensitivity. It is said that each person has traits and qualities governed by his or her animal birth sign.