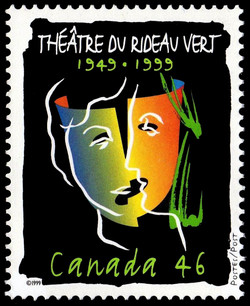 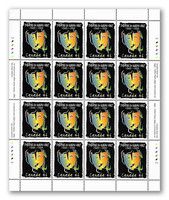 This year, Canada Post commemorates the theatre's golden anniversary with a dramatic single stamp issue. The masks of tragedy and comedy, universal symbols of the theatre, form the basis for this stamp's design, appearing against a striking black background. The mask of tragedy on the left, painted in a cold blue, has been transformed into a representation of Mercedes Palomino. In the mask of comedy on the right, rendered in bright orange, the profile of Yvette Brind'Amour is visible.

Le Rideau Vert revolutionized Quebec theatre, introducing audiences to classical and contemporary theatre from the world repertory and winning new fans for Quebec authors and playwrights. One of its most notable accomplishments was co-development with Michel Tremblay of the playright's first work, "Les belles-soeurs", a controversial piece that was written in the vernacular 'joual' of poor Montréal neighbourhoods. Today, Tremblay is one of Quebec's most celebrated artists.