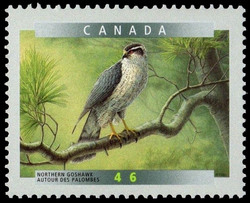 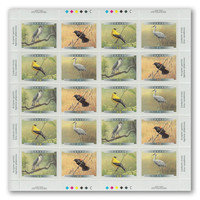 Collectors across Canada have come to anticipate the annual unveiling of the Birds of Canada issue. Indeed, this series, begun four years ago, is one of the most popular in the country. And the '99 slate does not disappoint! Along with four new Birds to feature (the red-winged blackbird, the Northern goshawk, the American goldfinch and the Sandhill crane), this year's issue also features a new format, the Birds of Canada Self-adhesive Booklet of 12.

A bird of prey that hunts by day, the Northern goshawk (Accipiter gentilis) is a relative of the eagle, hawk and osprey. Found across Canada, this bird is slate grey with a pale grey underbelly. A white or pale-grey stripe extends from the base of its bill to the back of its crown. Its tail, made up three to five black bars of plumage, is accented by a gray tip. A carnivore, the northern goshawk feeds on other birds and mammals - primarily on grouse, rabbits, squirrels, mice and snakes.

Pierre Leduc, noted scientific illustrator and wildlife artist from Stoneham, Quebec, created the acrylic paintings used in the Birds designs. They were adapted by designer Raymond Bellemare of Montreal. Leduc and Bellemare have created all the Birds issues released over the past four years. This year's design features a slight stylistic adjustment, however: the typographical bars have moved from the sides of the stamps, where they formerly acted as bookends for the images, to a top-bottom border configuration.