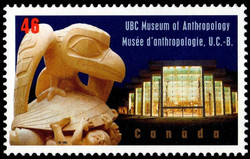 Once housed in a basement at the University of British Columbia, the UBC Museum of Anthropology (MOA) is now celebrating its 50th anniversary in a spectacular building designed by architect Arthur Erickson, overlooking mountains and the Strait of Georgia. Since its official opening in 1949, the museum has continually acted on its mission "to investigate, preserve and present objects and expressions of human creativity in order to promote understanding and respect for world cultures". While the MOA's collection contains objects from around the world - including a permanent installation of European ceramics in the Koerner Ceramics Gallery - the largest part of its holdings has been assembled from the materials of British Columbia's First Nations.

Most museums have less than five percent of their collections on display, but the MOA, a teaching museum, has more than 50 percent of its objects available for over 170,000 annual visitors to enjoy. In addition to archeological artifacts from indigenous cultures around the world, it also includes the world's largest collection of the works of the late Bill Reid, the legendary Haida artist and sculptor. Reid's famous and monumental cedar sculpture, The Raven and the First Men", is displayed in the rotunda of the museum, and can be seen in the foreground of the stamp. The large raven and the smaller human beings within the sculpture depict the Haida view of how people were created. The sculpture was unveiled by the Prince of Wales on April 1, 1980 in the presence of members of the Haida nation. Juxtaposed with this masterpiece is the masterpiece of the museum building itself, which stands in the background of the stamp. This part of the structure is the Great Hall. Employing modern materials to emulate West Coast First Nations architecture, The Great Hall is also used to form the logo of the museum. The selvedge of the stamp pane includes a selection of objects from the museum's collection, including a ceramic figure from Mexico, circa 100 A.D. and a Tamil bronze sculpture of a goddess, circa 1450, as well as an inscription noting the occasion of the stamp's issue.

Based on a sculpture by William Ronald Reid.