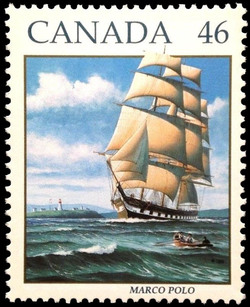 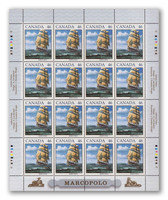 It was once hailed as "the fastest ship in the world" - the Saint John, New Brunswick-built "Marco Polo". During the 1800s, the area that was to become Canada's Maritimes produced many famous ships. In 1875 alone, about 500 were built in Canadian shipyards. By 1878, Canada had a merchant fleet of over 7,000 vessels, and was ranked 4th in the world among ship-owning nations.

Time was a valuable commodity for trans-Atlantic traders: ship speed was critical. Launched on April 17, 1851, the "Marco Polo" was created by James Smith to have the body of a cargo ship above the water line and the configuration of a much-faster clipper ship below. Smith was one of the first builders to meld the two designs. On May 31, 1851, the "Marco Polo" left Saint John for Liverpool, and set a record for the passage at 15 days. In addition to its hybrid design, the "Marco Polo" was unique for a New Brunswick-built ship in that she was fully rigged with three masts and square sails, and sported three complete decks. The ship's name was taken from its full-length figurehead - a representation of the famous traveller, Marco Polo.

Soon after, the "Marco Polo" was purchased by James Baines to ferry emigrants from Liverpool to Australia. As a part of Baines' celebrated Black Ball Line, she was refitted from a cargo ship to a passenger ship, with cabins, a dining salon and plenty of lavish ornamentation. On July 4, 1852, she set out for Australia, and the world was astonished when she returned to Liverpool only five months and 21 days later, setting a new speed record for circumnavigating the globe. The "Marco Polo" continued her Liverpool-Australia run until about 1867, then reverted to a cargo ship. On July 25, 1883, she encountered a furious storm off Prince Edward Island. In an effort to save the crew and cargo, the skipper ran the heavily-waterlogged ship aground near Cavendish, where the old ship was reduced to a shell when her beams were later cut to remove the Cargo. However, the legend of the world-famous "Marco Polo" lives on. She has been the subject of several paintings, and one, by marine artist J. Franklin Wright, commissioned by Canada Post, is featured on this Canadian stamp. It shows the "Marco Polo" under sail, leaving Saint John.

Designed by A. Lee Sackett. Based on a painting by J. Franklin Wright.