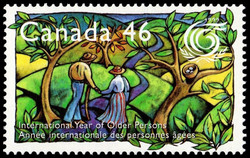 The United Nations, of which Canada is one of the original member-states, has declared 1999 to be the "International Year of Older Persons" (IYOP). Worldwide, within the next generations, the proportion of the population aged 60 and over will increase from one in four, bringing about significant social, economic and spiritual change. With these transformations in mind, the UN chose "towards a society for All Ages" to serve as the theme for IYOP. Throughout the year, participating countries will foster awareness of seniors' roles in society and the need for intergenerational respect and support, emphasizing the fact that older persons are the repository of their societies' histories.

Seniors, adults and youth will participate in activities that promote communication and collaboration between different age groups, cultivating an appreciation of the strength and knowledge that can be gained by sharing perspectives. IYOP will give Canada an opportunity, through the UN network, to learn and benefit from the experiences of other countries as their populations age. One of Canada's key objectives is to dispel myths about older persons. Today, Canadian seniors are a powerful consumer force, with better health and increased vitality. They're living longer and they're living independently, with the vast majority residing in their own homes rather than in institutions. Throughout 1999, seniors and seniors' groups, governments, private and volunteer groups, families communities and other organizations will take part in activities that celebrate seniors and their contributions to Canadian life. Canadians have played many roles in UN efforts, and several of these achievements are commemorated on stamps.

The style of this stamp was influenced by the graphic qualities of the UN IYOP logo, which has swirls symbolizing the continuing development and diversity on seniors. The stamp, designed by Paul Hodgson and Spencer Francey Peters, shows a metaphorical illustration of an older couple enjoying active experiences as they progress down the Road of Life. The trees that line this path symbolize the concept of passing time and aging, as young spring trees in the foreground give way to summer bloom and then autumn foliage on the horizon. The people are purposefully ambiguous to represent all humans and ethnic groups.

Designed by Paul Hodgson Based on an illustration by Shelagh Armstrong