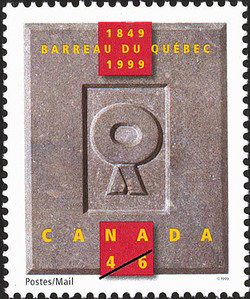 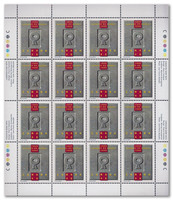 When designer Pierre Fontaine of Longueuil set out to create a stamp honouring the 150-year history of Le Barreau du Québec - the Quebec Bar Association - he came to an early realization. "I believe that no existing image, no matter how beautiful, can effectively represent both the 150-year history of the Barreau, and the Barreau as it exist today, so I have chosen to present the organization's current logo engraved on grey limestone. Limestone is representative of the historic buildings that make Quebec City and Montreal, the two main center of the Quebec Barreau's activities, so charming."

The designer's judgement is quickly affirmed when one views the new domestic-rate commemorative issue honouring the Quebec Bar Association, scheduled for release on June 3, 1999. The result of Fountaine's insight is a marriage of vision and stability. Morton Rosengarten's original cast-limestone sculpture was photographed by Jean-Pierre Beaudin, and retains its texture and density on this stamp superbly lithographed by the Canadian Bank Note company.

The Quebec Bar Association has is roots deep in the early development of the nation. Indeed, attorneys were forming local bar associations in Quebec as early as 1779 to maintain a code of high ethics and protect professional standards.

The first provincial body was incorporated almost 20 years before Confederation. Known then as the Bar of Lower Canada, that organization was founded by local organizations in Quebec, Montréal and Trois-Rivières. Over the years, the association's membership list has featured the names of some powerful figures, among them George-Étienne Cartier, Wilfrid Laurier, Louis St-Laurent, Pierre Elliott Trudeau, Brian Mulroney, Jean Chrétien, and almost all the premiers of Quebec.

An ambitious program of events will soon be underway, focused around the annual convention of the Association in Quebec City, June 3-5. Events will feature an exhibition of photographs in the Quebec City courthouse, and publication of a special issue of the bi-monthly publication Cap-aux-Diamants. Special souvenirs will include bookmarks, postcards and calendars, and Canada Post's impressive commemorative stamp, which will be available in stamp panes of 16, in corner sets, and on an Official First Day Cover to be cancelled in Quebec City.