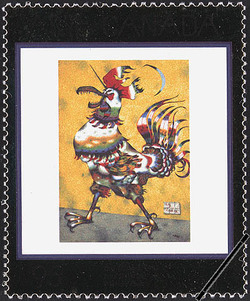 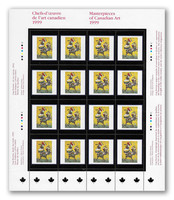 Coq licorne (1952)
While most collectors agree that every stamp is a miniature masterpiece, art aficionados greet our annual Masterpieces of Canadian Art releases with particular enthusiasm. Their attention will be well deserved this year, as Canada Post unveils a high-value commemorative stamp bearing the image of Coq licorne by Quebec artist Jean Dallaire.

The stamp itself is the work of Pierre-Yves Pelletier, the designer who worked on previous stamps in the Masterpiece series. The first five masterpieces in this series were framed with silver foil; the next five were surrounded with gold frames. This, the twelfth stamp, the second in the third series, appears within a platinum-foil frame as did last year's masterpiece. The stamp will be available singly, in panes of 16 in corner sets and, as always, on an official first day cover.

Jean Dallaire (1916-1965) created Coq licorne in 1952, adding a unicorn's horn to a rooster. This bold combination of a creature of myth and a common fowl has inspired observers with a wide variety of interpretations.

The rooster itself is the proud symbol of France. Dallaire was interned in France by the Nazis during the Second World War but, despite trying circumstances, learned to love that country well.

A mural artist, illustrator, painter and teacher, Dallaire was born in Hull, Quebec in 1916 and attended schools in that city. As a youth, he enjoyed drawing, painting and copying movie posters in the attic-studio of the family home. Later, he kept company with a group of artists known as the Confrères artiste du Caveau - the fellow artists of the cellar - an association that was for twenty years one of the most active of its kind in the Ottawa Valley, holding meetings, organizing exhibits, and teaching their techniques to other emerging artists.

Dallaire studied art in Hull, Toronto and Boston as well as taking courses at Montreal's School of Fine Arts. With his new bride, he left on a Quebec fellowship for a study trip to Europe and was in Paris when the Germans invaded. Interned in a civilian camp, Dallaire produced still lifes and portraits during his four years of prison. In 1945 he returned to Canada.

Living in Quebec City in the late 1940s, Jean taught and produced many murals and oil paintings, but moved to Ottawa in 1952 where he obtained work with the National Film Board, illustrating educational films on historic and folkloric subjects. He left the NFB in 1958.

Dallaire exhibited his works in such centres as Paris, Sao Paolo, Seattle, and San Francisco in the 1950s winning both the praise of critics and the admiration of collectors. In 1958 he returned to France and died in Vence in southern France in 1965.

Canada: Art and Soul
Canada has a long and proud history of excellence in art. The aboriginal carvings of first-nations communities themselves became the subjects of etchings and paintings of early explorers. Groundbreaking innovations by breakaway artists such as the Group of Seven captured world attention and today, enthusiasm for all forms of visual art is at last commonplace.

As the cover of this issue of Details makes clear, the Masterpiece series is an important annual tribute to the development and role of fine art in our country. And, as collectors prove each year, the series is itself a unique element of the heritage of a great nation.

PhilexFrance 99
This year's Masterpiece stamp will be unveiled at PhilexFrance 99, the world stamp exhibition taking place in Paris from July 2-11, 1999. Among other highlights, PhilexFrance 99 will honour 150 years of French postage stamps, and give visitors an opportunity to review the release in France of some 3,200 stamps since 1849.

Among other attractions at PhilexFrance will be exhibits on the themes of 'stamps in daily life', 'new stamp technologies' and 'the correspondence and postal items of world celebrities.' Paris in the summer, anyone?

Designed by Pierre-Yves Pelletier. Based on a painting by Jean Dallaire.