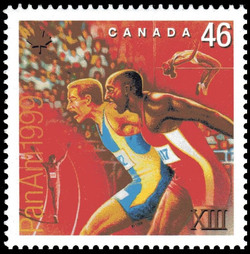 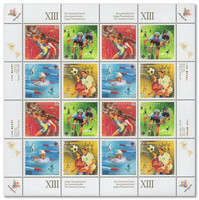 Except for the Summer Olympics, the Pan American Games are the largest multisport event in the world. Held in the summer preceding the Olympic Games, the attract thousands of amateur athletes from 42 countries in North, Central and South America and the Caribbean, who compete in 41 sports ranging from soccer to show jumping.

It is anticipated that the 1999 Games will rekindle a sense of excitement, optimism and shared vision as we approach the 21st century. Indeed, as the Pan American Games Society recently declared: "The Games provide the City of Winnipeg, the Province of Manitoba and Canada with a vehicle to promote new North and South economic and cultural relationships and, further, to showcase the City, the Province and the Country as attractive and dynamic communities."

Canada has made a consistent and successful showing in the games, winning an all-time high 177 medals in 1995. This summer, Winnipeg hosts its second Pan Am Games, welcoming 5,000 athletes to the Prairies. The theme of the 1999 Pan Am Games - "Where the Americas come to play" - is expressed in four stunning stamps by means of lively illustrate approach using the Games' own distinctive colour palette. Each of the four 36 mm squares stamps depicts three sports scenarios - a central, dynamic, action scene framed by two background images in the corners. A gold maple leaf and Roman numeral XIII also adorn two opposing corners of each stamp. A corner block of the four stamps is imbued with dynamic energy thanks to strong diagonal motion in the design and the vibrant, complementary colours.