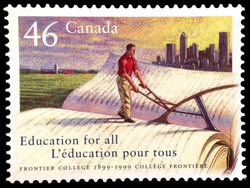 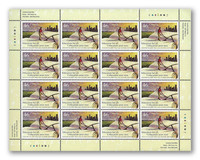 Canada Post, another strong supporter of literacy in Canada, joins in celebrating the 100th anniversary of this historic institution with the release of an evocative new domestic-rate stamp. A product of Toronto's Q30 Design Inc., under the art direction of Peter Scott and Glenda Rissman, the Frontier College issue will be featured on a pane of 16 and, as always, on Official First Day Covers.

A University in Overalls

In 1903, with 24 reading rooms already in operation, Frontier College suddenly took on a more active role in adult education. Teacher Angus Gray grew restless waiting for men to drop in at the end of the day. Joining them in their work, he initiated the concept of the labourer-teacher.

On the eve of the First World War, 79 instructors were serving in eight provinces, and in 1919 the Reading Camp Association took on the name Frontier College. By 1922, Fitzpatrick had obtained degree-granting powers for his "university in overalls," but this concept was abandoned following Fitzpatrick's retirement in 1933. He died three years later.

The isolated unemployment-relief camps of the Great Depression and the flood of immigrants following World War II created fertile ground for Frontier College. Working the highways, mines and forests of the north again returned the College to its traditional role.

Today, with funding from government, federal agencies, foundations, and both corporate and individual donors, Frontier College continues its grass-roots literacy crusade in urban and rural settings across Canada.

Art director Peter Scott comments on the challenges presented by this stamp's design. "The letter 'A' you see in the plow ­ reinforcing the college's literacy role and its teacher-labourer approach ­ provides a good example. We had to achieve instant recognition ­ because most people only see a stamp at a glance ­ while conveying information in a very small space."