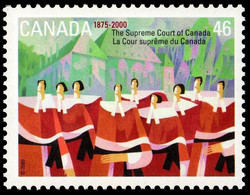 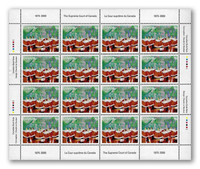 The Year 2000 marks the 125th anniversary of the Supreme Court of Canada, and Canada Post is proud to celebrate this event by issuing a richly textured domestic-rate commemorative stamp. The release of this new stamp, available singly, in a pane of 16 and on an Official First Day Cover, follows the anniversary of the Court's founding legislation on April 8, 1875.

Sovereign Law
The Supreme Court of Canada was created by the Liberal government of Alexander Mackenzie. As was required at that time, the bill was sent to Great Britain for approval and the Mother Court was reluctant to terminate the perogative on any British citizen to appeal to the "foot of the throne." Consequently, it was not until 1949 that the final appellate jurisdiction was transfered to Canada.

The Supreme Court of Canada consists of a chief justice and eight "puisne" justices, appointed by the governor-in-council. The Court is the highest court of the land, and one of Canada's most important national institutions. As the final general court of appeal it is the last judicial resort for litigants, either individuals or governments. Its jurisdiction embraces both the civil law of the provinces of Québec and the common law of the other nine provinces and three territories. The court hears cases on appeal from the provincial and territorial courts of appeal, and from the Appeal Division of the Federal Court of Canada. In addition, the Court is required to give its opinion on any question referred to it by the governor-in-council. The importance of the Court's decisions for Canadian society is well recognized. The Court assures uniformity, consistency and correctness in the articulation, development and interpretation of legal principles throughout the Canadian judicial system.

Drawing on integrity
The design for the Supreme Court of Canada stamp features an original painting by Claude Le Sauteur. The artist's use of colour and composition gives the nine justices pride of place in contrast to the muted tones of the background elements. La Sauteur assembled the images closely and presented them with an attitude and appearance of great dignity in a portrayal that symbolizes the unity and strength of the Court and upholds the relevance and vitality of this institution for all Canadians.