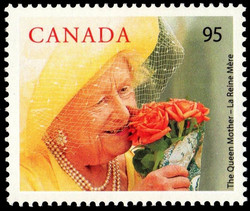 The hidden date for this stamp can be found near the Queen Mother's hand. Her life so far has spanned history's most compelling century. She witnessed two world wars, one as the wife of a reigning monarch. She watched the unparalleled advance of science and technology. Today, The Queen Mother remains a vital part of the British royal family.

It is with pride that Canada Post joins in celebrating the 100 years of her life with the release of a special international rate commemorative stamp, available in a presentation folder as a souvenir pane of nine stamps. An Ottawa-cancelled official first day cover will also accompany this new release.

Born the Honourable Elizabeth Angela Marguerite Bowes-Lyon on August 4, 1900, she married the second son of King George V, the Duke of York, in 1923. They had two children, Princess Elizabeth and Princess Margaret.

When King George V died in 1936, his oldest son, the Prince of Wales, ascended the throne as King Edward VIII, but abdicated in December of the same year. As a result, the Duke and Duchess of York assumed the throne. In a ceremony that drew over a million people to London, they were crowned in May of 1937.

With the outbreak of war in 1939, rather than evacuate to North America as some suggested, the Queen chose to bolster the spirits of her subjects by remaining in Great Britain with the two princesses, sharing with the people the dangers and difficulties of the Second World War. The Queen was in Buckingham Palace when it was bombed during the Battle of Britain in September of 1940. Her resilience helped inspire her nation's defiance, and the significant victory over the German air force in that battle was the Allies' first of the war.

In February 1952, young Elizabeth was recalled from Africa after receiving word that her father, the King, was dead. She had left England a Princess and returned a Queen.

Following her daughter's ascension to the throne, the King's widow assumed the title of Queen Mother and remained an active public figure, and among her responsibilities, served as Chancellor of the University of London from 1955 to 1980.

The Queen Mother's connections to Canada have made her a regular visitor over the decades. She is Colonel-in-Chief of the Canadian Forces Medical Services, The Black Watch (The Royal Highland Regiment) of Canada and the Toronto Scottish Regiment. In that capacity, she has helped the Black Watch celebrate its 100th and 125th anniversaries, and the Scottish Regiment its 50th.

Ian Drolet of Montréal's Gottschalk + Ash designed this new release. Collectors may recognize his work from the McLuhan stamp in the Millennium Collection. For The Queen Mother issue, Drolet utilized a photograph of The Queen Mother on her 99th birthday, by William Conran. Integrated into the design of the souvenir sheet are the insignia of the three Canadian military units over which The Queen Mother serves as Colonel-in-Chief.