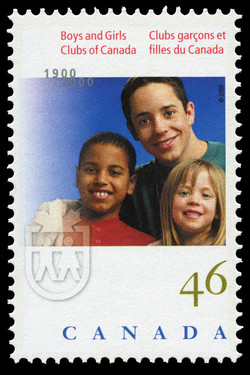 This year, the Boys and Girls Clubs of Canada celebrate a century of serving young Canadians. To commemorate this special anniversary, Canada Post will issue a single domestic-rate stamp during the youth organization's National Conference to be available as a 16-stamp pane. An official first day cover of the Boys and Girls Clubs of Canada stamp will be cancelled in Saint John, N.B., where the country's first such club was formed.

Today, the Boys and Girls Clubs of Canada comprise 99 local chapters, nine regional offices and a national headquarters ­ all committed to promoting the healthy growth and development of Canada's youth.

Enriching Lives
Canada's Boys and Girls Clubs address virtually every aspect of young peoples' lives, from education and career development to fostering cultural understanding and tolerance. One of the fastest-growing services at present involves providing access to ­ and instruction in ­ information technologies. Youth Start! is one such program. Sponsored by Microsoft, it gives more than 10,000 club members access to the latest computer equipment, software and training.

In addition to many greatly appreciated corporate sponsors the Boys and Girls Clubs of Canada enjoy the support of dozens of prominent figures, including country star Shania Twain and sportscaster Don Cherry.

The clubs began exclusively for boys, based on a model imported from the US. Conceived as a means of keeping youth out of trouble and off the streets, they spread throughout Canada during the early years of the last century. During the 1970s, an increasing number of services were being offered to girls and young Canadian women, and the organization adopted its present name.

Youthful Voices
The Boys and Girls Clubs of Canada offer hundreds of programs and special-activity groups. One of the most intriguing is the National Youth Council, a body dedicated to achieving a positive influence over decisions that affect or relate to Canadian youth. Made up of one Boys and Girls Club member from every region, the council meets twice a year to discuss the concerns and priorities of youth from across the country. Providing direction
"The challenge in this assignment was to convey a sense of the positive results of the organization in helping shape the direction of our youth," says Gary Ludwig, award winning designer and Creative Director of Gottschalk+Ash International of Toronto.

Designed by Gary Ludwig Based on a photograph by Silvio Calcagno