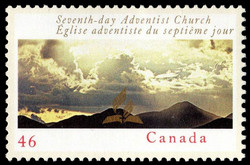 The hidden date for this stamp can be in the bottom-left corner of the stamp.

This summer, the Seventh-day Adventist World Session will be held in Canada for the first time in its 137-year history. To mark the Church's 57th international meeting, Canada Post will issue a single domestic-rate commemorative stamp which will be available singly and as a 16-stamp pane. The Official First Day Cover will be cancelled in Toronto, where churchgoers will gather from June 29 until July 8.

The Seventh-day Adventist (SDA) Church was organized in 1863, after founding members split from the Advent Awakening, or Millerite movement. The Church's name was derived from two aspects of the group's belief: the imminent Second Coming, or advent, of Jesus Christ, and its observance of Saturday as the Sabbath.

Today, with nearly 11 million members, Seventh-day Adventism is one of the world's fastest growing Christian denominations. Its widespread missionary work has established the Church in 207 countries around the world, creating more than 6,000 new congregations since 1990.

The Church's General Conference Session is held every five years. It is the highest earthly authority of the Church, where decisions are made that guide and govern every aspect of Seventh-day Adventist life. Sessions are also a time for fellowship; they offer the chance to celebrate the ethnic and cultural diversity embraced by the Church.

The design team at Malcolm Waddell Associates of Toronto was anxious to create a stamp that would honour both the Church and the session's host country, Canada. After sifting through numerous portfolios of Canadian scenic photography, the designers selected the image of the sun breaking through the clouds in a Rocky Mountain setting as the stamp's central visual element.

Superimposed on the photograph is the symbol of the SDA Church ­ an open bible with a cross and flames.

This will be the first visit to Canada for many of the thousands of delegates attending the General Conference. For them, this new stamp will be a unique memento of an important spiritual gathering.

Designed by Malcolm Waddell Based on a photograph by Carl Hiebert