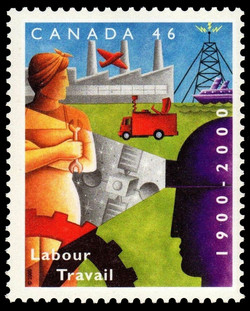 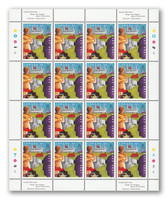 "Canadians have worked hard to achieve the kinds of workplace standards that we enjoy. They reflect our basic values as a society".

The Department of Labour has championed workers' rights for 100 years. Shortly before Labour Day 2000, Canada Post will issue a single domestic rate (46¢) commemorative stamp to mark the Department's 100th anniversary. Labour Canada credits William Lyon Mackenzie King with the founding and creation of the Department of Labour. In 1889 King, then a journalist, was investigating horrid working conditions in the garment industry. "Sweatshops" had been awarded contracts to make uniforms for Canadian letter carriers. King was mortified by what he saw. He took his findings directly to Postmaster General William Mulock who introduced a bill in Parliament. In July of 1900, the Conciliation Act was given royal assent. William Mulock became the Minister of Labour as well as Postmaster General, and King was named first editor of the Labour Gazette. Later that year, King became the first Deputy Minister of Labour. By the end of the Department's first decade, the position of Minister of Labour had become a separate cabinet post held by King.

Change and Growth
Through two world wars and the Great Depression, the Department of Labour's responsibilities grew to include collective bargaining and conciliation of federal level disputes, employment services programs, technical education, old age pensions and unemployment services. The post-war boom brought great strides in fair and equitable employment practices. In 1953 it became unlawful to practice discrimination by reason of race, national origin, colour or religion in any industry under federal jurisdiction. The 60s saw the introduction of the Canada Labour Code. In the last two decades of the century, amendments and refinements continued to ensure equal employment opportunity. In its second century, the organization's mission is to promote a fair, healthy and productive work environment that contributes to the social and economic well-being of all Canadians.

The Art of the Stamp
Paul Hodgson, Executive Creative Director at Spencer Francey Peters in Toronto, designed the Department of Labour commemorative stamp. The illustration is by Toronto artist Sandra Dionisi whose work has appeared on book covers and magazines. The graphic approach uses conceptual illustration to unify types of Canadian labour with the men and women who built the country on pride and hard work. The illustration blends a contemporary feeling with the "poster style" ambiance of labour's cultural history.

Designed by Paul Hodgson Based on an illustration by Sandra Dionisi