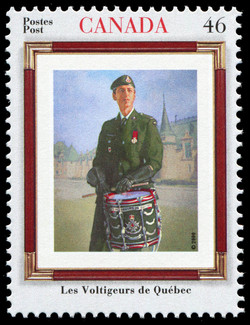 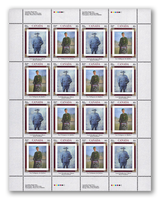 Donald Alexander Smith (1820-1914), 1st Baron Strathcona, raised a cavalry unit (with his own money) for service in South Africa. A very wealthy man, his proposal was accepted in January of 1900, and the regiment eventually became known as Lord Strathcona's Horse (Royal Canadians). The first commander of the regiment was the legendary Samuel Benfield Steele (1849-1919) of the North-West Mounted Police, known for bringing law and order to the Yukon Territory during the Gold Rush*.

Made up of former cowboys and members of the N.W.M.P., all were experienced riders and marksmen. It distinguished itself in South Africa where Sgt. Richardson won the Victoria Cross. During the First World War, Lt. Frederick Harvey earned the Victoria Cross at Guyencourt, France, and Lt. Gordon Flowerdew won the same award at Moreuil Wood.

With the outbreak of the Second World War, the regiment traded their horses for tanks and saw important engagements at the Melfa River in Italy, and later in Holland. They celebrated their centenary in May of 2000 with many of this distinguished regiment's brave veterans on-hand.

A new Canadian militia unit was created in Quebec City in 1862, becoming known as 'The 9th Battalion Volunteer Militia Rifles, Canada' (or Voltigeurs of Québec). The regiment first saw service during the Fenian Raids (1864-1866 and 1870), then served during the Northwest Rebellion of 1885.

Joseph Vézina, a celebrated Quebec musician and composer, was the regimental band's director from 1867 to 1879. On the 24th of June, 1880 (St. Jean-Baptiste Day), he assembled a group of musicians, including members of the military band of the 9th Battalion, to play a series of popular Canadian melodies including 'Chant national', an arrangement that would in time become the anthem 'O Canada' that's so well-known and loved today.

In the First World War, the regiment would contribute more than five hundred volunteers and recruits for service with the Canadian Expeditionary Force.

While most Canadian military units have flags (or 'Colours') bearing the regimental insignia and combat history, Les Voltigeurs (a rifle regiment) uses drums to display their battle honours. The stamp reflects this great tradition by featuring a member of the regiment in present-day uniform with the drum bearing the honours 'Northwest Canada 1885' and 'First World War'.

*Sir Sam Steele appeared on a stamp in the 'Yukon Gold Discovery' set of 1996.