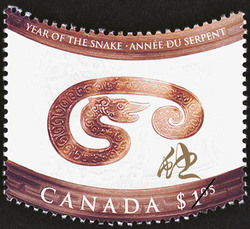 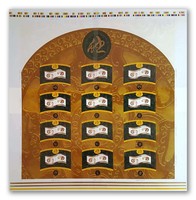 The most celebrated of all Chinese festivities, the lunar new year is a time of gathering, cleansing, celebrating, feasting and renewing. January 24, 2001 marks the beginning of the Year of the Snake - the sixth of twelve animals governing the period of one lunar year in a twelve-year cycle. Canada Post joins Asian communities around the world in paying homage to this ancient tradition through the issuing of two commemorative stamps ($0.47 and $1.05). Due to the significance of this occasion, and in response to the popularity of previous Lunar New Year issues, Canada Post offers the collector a variety of products featuring the Year of the Snake stamp. The ornate domestic rate stamp is available in a pane of 25 and the international rate stamp graces the beautifully designed souvenir sheet. This souvenir sheet is also available as an uncut press sheet - a popular format and an excellent addition to any collection.

The lunar calendar is the oldest chronological record in the world, dating back to 2637 B.C. Unlike the Western calendar, which is based on the positions of the earth and sun, the lunar calendar tracks the orbit of the moon. Thus, the first new moon between January 21 and February 19 marks the beginning of a new lunar year. Each year is named after one of twelve animals in a twelve-year cycle, which repeats itself after the twelve-year period. According to legend, when Buddha convened the animal kingdom to determine how to restore order to the world, only twelve animals appeared. These twelve beasts cam-e to represent the Chinese zodiac, with each animal presiding over one year. Each year is said to possess the characteristics of one animal, and a person's character, personality and individual fortune can be determined by the sign under which they were born.

The Year of the Snake

The snake represents power and divinity, and is second only to the dragon in the mystical intrigue it holds for the Chinese. A prominent figure in ancient stories and legends, the snake may be good or evil. People born in the year of the snake are said to be deep thinkers, graceful, and soft-spoken. Snakes learn fast, and can be prudent and shrewd in business. Elegant in speech, dress, and manners, their inner strength allows them to maintain a presence of mind in times of hardship - qualities that deem them appropriate to become philosophers, theologians, politicians, and financiers. One's fortune is not dictated by year of birth alone…the relationship of each of the twelve zodiac signs with the five elements of the universe - gold/metal, wood, water, fire and earth - has an impact on how a person will fare in life. The year 2001 belongs to the element metal, and metal snakes are endowed with a calculating, intelligent mind and forceful willpower - making them the most secretive, evasive and confident of all snake types.

Lunar new year preparations begin long before the actual date, and celebrations last for fifteen days. To avoid shame, misfortune, and the carrying-over of bad things into the new year, all debts are paid off before year's end. And because good fortune favours a clean home, all families thoroughly clean their houses on the 28th of the month preceding the new year. Every home is decorated in ornate red papers and streamers bearing lucky phrases. Come New Year's Eve, families gather to enjoy a feast in which all the dishes have names suggesting good luck, long life, and prosperity. During the first week of the new year, friends and relatives will visit one another in their homes.

Chinese-Canadian Marlene Wou was responsible for the creative direction of all Year of the Snake design. Together with jade sculptor Lyle Sopel and Chinese calligrapher Yukman Lai, she set out to portray the snake in a positive manner while capturing its fluid form and decorative body patterns. By stylizing the form of the snake and embellishing its body with ornate patterns, this goal was achieved.