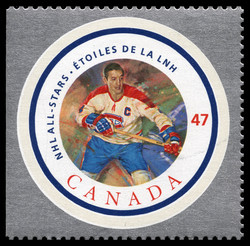 A rare blend of grace and power, Jean Béliveau first began to attract province-wide attention as a junior player with the Quebec Citadelles; attention that grew during his senior years with the Quebec Aces. His much-anticipated transition to the NHL took place October 3, 1953, when Béliveau signed with the Montreal Canadiens. During his 18 full seasons with the Canadiens, Béliveau helped his team win 10 Stanley Cup championships. He was also named to 10 All-Star teams. Before his retirement in 1971, Béliveau had set the record for most goals scored by a centre.