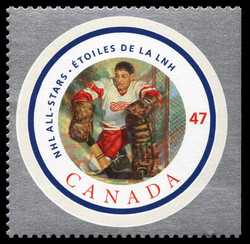 The hidden date for this stamp can be found on the goalie's hockey stick. By playing more games and recording more shutouts than any other goaltender in NHL history, Terry Sawchuk was considered by many to be the greatest goalie of all time. After joining the Detroit Red Wings' junior club in 1946, Sawchuk went on to become rookie of the year in three separate leagues (United States Hockey League 1947-48, American Hockey League 1948-49, and the NHL 1950-51). He made his NHL debut with the Detroit Red Wings during the 1949-50 season, and was named to seven All-Star teams during his 20-season career. Despite numerous injuries, Sawchuk set the standard by which today's goaltenders are measured.