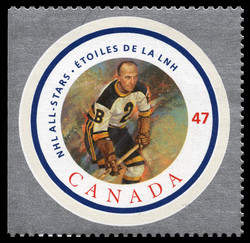 Fans remember Eddie Shore as a rough-and-tumble player with abundant skill, lightning speed, and an explosive temper. Shore began his professional career with the Regina Caps in 1924-25 and joined the NHL's Boston Bruins in 1926-27, and within three years of Shore's arrival the Bruins were Stanley Cup champions. A First Team All-Star player seven times, Shore will forever be remembered as one of the game's toughest and most determined defencemen.