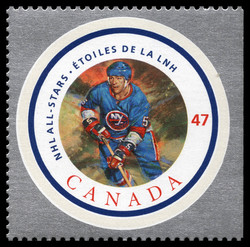 One of the greatest two-way players in hockey history, Denis Potvin had promise even before he reached the NHL. He was the New York Islanders' first draft pick in the 1973 NHL amateur draft, and he became the cornerstone of a team that would go on to win four consecutive Stanley Cup championships. Potvin led the team in scoring for the first four straight seasons and helped the club improve its defensive record. When Potvin retired in 1988, he was the all-time leading NHL defenceman in goals, assists and points.