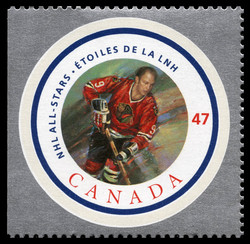 Blessed with incredible speed and an explosive slapshot, Bobby Hull rose quickly through the minor hockey ranks then to the top of NHL scoring. He signed with the Chicago Black Hawks at the age of 14, entering the NHL at just 18. Hull became the first player to score more than 50 regular-season goals in more than one season, and was an All-Star a total of 12 times. By the time Hull had joined the Winnipeg Jets of the World Hockey Association, "The Golden Jet" had established himself as a fan favourite and a true hockey legend.