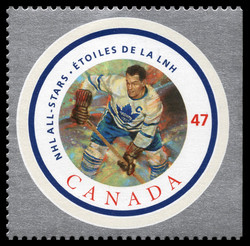 Immensely talented and highly skilled, Syl Apps became an inspirational leader for the Toronto Maple Leafs during the late 1930s and '40s. His athletic abilities - spanning football and pole-vaulting - attracted the attention of the Leafs in 1934, which led to Apps joining them in the 1936-37 season. He led the league in assists that season and was rewarded with the Calder trophy for rookie of the year. Captain of the Leafs prior to the 1940-41 season, Apps went on to lead his team to a total of three Stanley Cup championships before retiring in 1948.