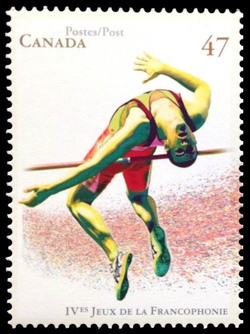 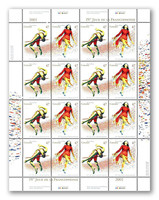 Every four years, athletes and artists from the more than 50 countries making up La Francophonie gather in a unique combination of competition encompassing sports and culture. The IV Games of La Francophonie will take place in Ottawa-Hull from July 14 to 24, 2001 with approximately 2,600 athletes attending. Two domestic-rate ($0.47) stamps celebrate this unique and anticipated event.

More than 50 governments and countries are members of La Francophonie, a loosely united group of nations in which French is a first, official, or culturally significant language. Within this group of nations there is much diversity in culture, traditions, lifestyle and cuisine, and during the 1987 Francophonie Conference at Quebec City, it was decided that games celebrating these similarities and diversities would be held every four years in one of the member countries.

The Games of La Francophonie

Slated to be held in Ottawa-Hull, the 2001 Games of La Francophonie are expected to draw 2,600 athletes from more than 50 countries, along with approximately 100,000 visitors. The resulting economic impact on the National Capital Region is estimated at $70 million. Events will take place in Lansdowne Park and at Mooney's Bay in Ottawa and at the Robert Guertin Arena in Hull, with an opening ceremony in Lansdowne Park on July 14 and a closing ceremony on July 24 at Casino de Hull/Leamy Lake. Between June 24 and July 24, a "Super Francofête" -performances and shows put on by participants from around the world - will be staged at various locations throughout the region.

Designer Clermont Malenfant of Montreal uses two illustrations based on actual photographs to reflect the two main components of the Games of La Francophonie - the sports competition and the cultural competition. The male high-jumper and the female dancer represent the individual effort in sports and culture aimed at reaching excellence, but stress differences in skills and talent needed to do so.

Based on a photograph by Guy Lavigueur.