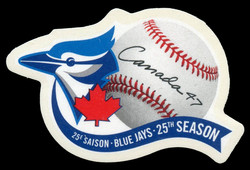 Joe Carter's bottom-of-the-ninth, three-run home run in game 6 of the 1993 World Series became the image of the Toronto Blue Jays. Since opening day in 1977, the Blue Jays had fought their way to the top of the league, finally bringing the World Series trophy home to Canada in 1992.

As early as their first season, the blue Jays were breaking records. They were the first Canadian team to be accepted into the American League, and in 1990 became the first baseball team to break the 4 million mark in attendance for the season. In 1985, the Blue Jays won the American League East championship for the first time. That winning perspective was repeated in 1989, and again in 1991 when the team came from behind to beat the Los Angeles Angels.

In 1992, after breaking the 4 million attendance record and capturing the AL East title for the fourth time, the Blue Jays were about to write another chapter in baseball history. They became the first Canadian team ever to go to The World Series. Overcoming a first game loss to the Atlanta Braves, the Blue Jays quickly took a 3-1 series lead. They finally took the crown in game 6, and came home to Canada as world champions.

Repeat performance.
In 1993, the Jays went to the World Series for the second year in a row. This time they faced the Philadelphia Phillies, and once again the Blue Jays came out on top. With Joe Carter providing the heroics in the bottom of the ninth, the blue Jays captured their second consecutive World Series title and the hearts of the whole country.

It is 1996, the team's 20th season. Pitcher Pat Hentgen won the coveted Cy Young award, Joe Carter had yet another 30 homer, 100 RBI season, and in 1998 Carlos Delgado became team captain. In 2001, the winning tradition continues. The Blue Jays are still "Canada's Team" and are entering their 25th season in the major leagues. Ault, Stieb, Whitt, Bell, Winfield, Alomar, Carter, Molitor and Hentgen. These are just a few of the names that have made us clap, cheer and above all, made us proud to be Canadian.

To commemorate 25 years of outstanding team spirit, Canada Post commissioned renowned designer Paul Haslip to produce a stamp that is a celebration of the team's accomplishments. Paul's design combines several elements of baseball tradition, including a photographic rendition of a ball, as well as the Blue Jays' 25th anniversary logo. "This led to the idea of having the "Canada 47" in the same style as a player's signature," says Paul.