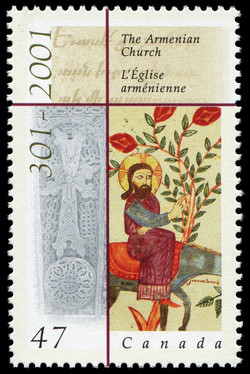 The hidden date for this stamp can be found on the donkey. 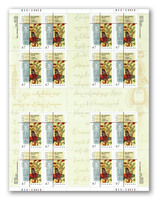 Armenia became the first nation in the world to adopt Christianity as its state religion. As Armenia celebrates, Canada Post marks the occasion with a single domestic rate ($0.47) stamp issued on May 16, 2001. An estimated 50,000 Armenians live in Canada; their heritage preserved through Armenian schools and a variety of social, cultural, and sports centres across the country.

Armenia
Armenia's historical boundaries have varied considerably, but are generally seen as spanning the northeastern part of Turkey and the former Armenian Soviet Socialist Republic. The Republic of Armenia - a small mountainous country located north of Iran between the Black and Caspian seas - has a population of 3.6 million people, 96 percent of whom are Armenian.

Christianity in Armenia
Between 35 and 68 AD, two of Christ's apostles - St. Thaddeus and St. Bartholomew - introduced Christianity to Armenia. Legend has it that St. Gregory, a Christian monk, cured Armenia's king of a skin disease and brought him closer to the ideas of Christianity; ideas already widely embraced by many of his people. In 301 AD the king declared Christianity the state religion and named St. Gregory the head, or Catholicos, of the Armenian National Apostolic Church.

The Illuminator
St. Gregory, also known as "Lusavoritch" or the "Illuminator," ruled as Catholicos for 25 years, leaving an indelible imprint on the Armenian Church. Canons bear his name, his homilies are part of the service, and his liturgical laws are still in use today. In 303 AD, he completed the building of the Mother Church and named it the Holy See at Echmiadzin.

Armenian Canadians
The first known Armenian immigrant arrived in Port Hope, Ontario in 1887, with successive waves of immigrants settling in Georgetown (Ontario), Montréal, Toronto, Vancouver, Calgary, and other areas of Canada. Today, an estimated 50,000 live throughout the country; the most concentrated community is in Montréal. Armenian Canadians have excelled in many areas, including photography (Malak and Yousuf Karsh), painting, sculpture, film (Atom Egoyan), and music.

About the Stamp
Designer Debbie Adams of Toronto looked to the rich
history of the Armenian Church when designing this issue. She included elements important to the Church: a Khachkar (cross stone), an image of Christ, and details from "Leafs from an Evangelary: The Entry into Jerusalem." The "cross" shape is also visible in the division of the artifacts and in the layout of the pane.