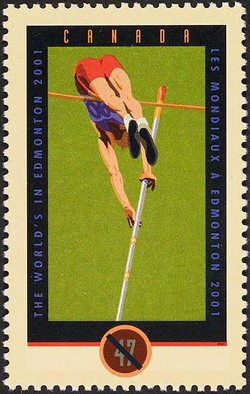 In 1912, the International Amateur Athletic Federation (IAAF) was founded by 17 national athletic federations. Their goal was to establish guidelines on the use of equipment and the parameters of world records in amateur athletics. In Europe and other parts of the world, "athletics" is the term used to describe what we in North America know as "track and field."

...Go
Today, the IAAF is made up of 208 countries from Europe, Africa, Asia, and Oceania, plus North, South and Central America. In addition to maintaining their original goals, the members of the IAAF also work together to improve coaching, practices of officials, and scientific and medical procedures for athletes around the world.

Canada Takes the Lead
In 1983, the IAAF held its first World Championships in Helsinki, Finland. This year, sports history will be made as the IAAF World Championships in Athletics come to Canada. Rome, Tokyo, Stuttgart, Göteborg, Athens and Seville have all played host to this international event. Now the City of Edmonton will welcome the athletes, coaches and media of the IAAF's member countries, August 3 - 12, 2001.

Breaking All the Records
Beginning with a marathon race during the opening ceremony and ending with the handing-over of the flag to the City of Paris, host of the next championship in 2003, the world will be watching the City of Edmonton. Broadcast to over 4 billion viewers in 200 countries, this world-class competition will feature 2000 athletes in over 40 disciplines including jumping, throwing and racing events.

A Winning Design
A graduate of the Alberta College of Art and Design, designer Tim Nokes has produced two stamps that have the look of true champions. These stamps not only reflect the IAAF's history but also look to its future. In order to reflect the many different aspects of these championships, Tim began by designing one stamp to symbolize the track events and one for the field. With the use of a broad palette of striking colours, Tim further enhanced his design by featuring a single figure on each stamp, both captured at the crucial point of their particular event. "This gives the audience a unique perspective of the individual event," says Tim. "This also reflects the athlete's personal definition of performance and excellence," he adds.