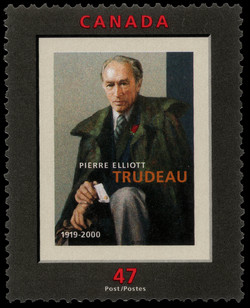 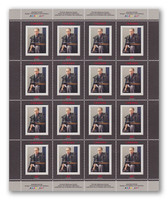 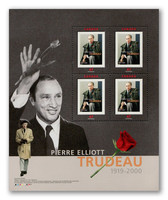 He was named "top Canadian newsmaker of the 20th century" in December 1999. He implemented the Official Languages Act, Wage and Price controls, the Canadian Charter of Rights and Freedoms and worked the War Measures Act. He appointed the first woman Speaker in the House of Commons and Canada's first woman Governor-General. He vowed to keep the state out of the nation's bedrooms. On July 1st, 2001, Canada Post will issue a single domestic rate stamp to commemorate the life and career of Pierre Elliott Trudeau.

The Early Years
The son of a French-speaking millionaire businessman and an English-speaking mother, Joseph Phillippe Pierre Yves Elliott Trudeau was born in Montréal on October 18, 1919. He graduated from Montréal's Jesuit Collège Jean-de-Brébeuf in 1940 then received a law degree from l'Université de Montréal in 1943. Trudeau then went on to study at Harvard, the École libre des sciences politiques in Paris, and the London School of Economics.

A Just Society
In the early 1960s, Trudeau taught law at the Université de Montréal, advocating a new Canadian federalism with equality for both English and French Canada. In 1965, Trudeau, Jean Marchand and Gérard Pelletier joined the federal Liberal Party and were elected to Parliament. Pierre Trudeau was appointed parliamentary secretary to Prime Minister Lester B. Pearson and in 1967 was made minister of justice. In this role, Trudeau introduced divorce law reform and liberalized laws on homosexuality and abortion.

The Rt. Honourable Pierre Elliott Trudeau
After Pearson announced his resignation, Trudeau sought Liberal Party leadership. He was elected on the fourth ballot and sworn in as Canada's 15th prime minister on April 20, 1968. He quickly became popular with Canadians; "Trudeaumania" swept the country. Narrowly re-elected in 1972, Trudeau formed a minority government with the NDP's support. After being re-elected with a majority in 1974, Trudeau was defeated in 1979, an event which led to his decision to resign as Liberal leader and retire from public life. But on February 8, 1980, Trudeau returned as prime minister, remaining so until June 30, 1984.

On September 7, 2000, the Trudeau family announced to the world that the former prime minister was not well. On September 28, 2000, Pierre Trudeau died with his family by his side.

Philatelic Tribute
Designed by Tom Yakobina of Montréal, the stamp features a portrait by Myfanwy Pavelic. The portrait currently hangs in the south corridor of the Centre Block in the Parliament Buildings, and was unveiled on May 1st, 1992.