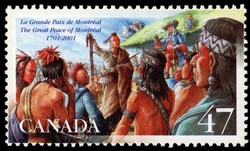 One of the most significant diplomatic events in the history of North America took place in 1701 when New France and more than 30 First Nations signed the Great Peace Treaty of Montréal, officially ending nearly a century of conflict and introducing a new era of peace between the French, their First Nations allies and the Iroquois. On August 3, 2001, Canada Post will issue a single domestic rate commemorative stamp to mark the 300th anniversary of the Great Peace.

A Time of Turmoil
When Louis-Hector de Callière (1648-1703) assumed power as Governor General of New France, he faced a serious problem with the Iroquois who were caught up in fur trade rivalry between Albany (NY) and New France. Lengthy hostilities had pitted New France and its allies against the Iroquois. To counter the Iroquois, the French fortified their settlements and enclosed Montréal in a palisade, but lives were in constant danger.

Peace Talks
In attempting to negotiate a treaty with the Iroquois, de Callière needed to include all First Nations allied to the French. However, some of these tribes had been warring with the Iroquois longer than could be remembered. After three years of negotiations, some thirteen hundred individuals from over thirty nations gathered in Montréal for a great feast. Afterwards, de Callière's treaty was signed by officials of New France and agreed to by the chiefs of all attending nations, officially ending almost a century of conflict.

Three Centuries Later
The Corporation des fêtes de la Grande Paix de Montréal was created to set up a Great Peace commemorative project in 2001 through which Quebecers, as well as other Canadians and Americans could learn more about this largely unknown yet profoundly significant event in Canadian history. Commemorative celebrations will be held over much of the summer, peaking on August 4, the 300th anniversary of the date the treaty was signed. Civic and religious ceremonies and special parties celebrating history, art, music, dance and food, will be held in the spirit of fraternity.

An Illustrated History
Designed by Normand Tessier and Francis Back, both of Montréal, this stamp features Back's recreation of what the Great Peace negotiations might have looked like. In the centre, and facing the viewers, is the Ottawa chief Hassaki; in the left foreground stand two Iroquois ambassadors; next to them stands Onanguicié, the Potawatomi chief; to his right stands Louis Franquelin, the royal hydrographer of Quebec; in the right foreground stands a chief from the Great Lakes; and in the right background is Governor de Callière of France.

Designed by Normand Tessier Based on an illustration by Francis Back