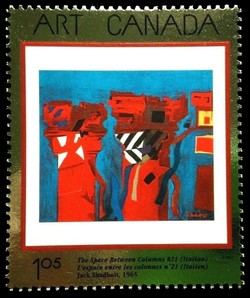 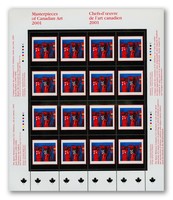 Canada Post's immensely popular Masterpieces of Canadian Art series continues to showcase the finest work of Canada's greatest visual artists. Fourteenth in the series is the 1965 oil-on-canvas painting entitled The Space Between Columns #21 (Italian) by Jack Shadbolt, one of the most important Canadian painters of his generation.

The Masterpiece
The Space Between Columns #21 (Italian) is one in a major series of paintings in which Jack Shadbolt explored the intersection of abstract pattern and subject matter drawn from travels in the Mediterranean. Shadbolt based his artistic practice on close observation of the world, but regarded realism as only the base from which artistic ideas should grow. During the 1960s, Shadbolt explored abstraction based on his observation of the world; from this came his important series The Space Between Columns.

Bold Expression
With the forms of classical architecture as his inspiration, Shadbolt painted with brilliant colour and keen attention to pattern and form. In this work, Shadbolt displays his strong abilities as a draughtsman and his deep interest in the use of bold colours. The Space Between Columns #21 (Italian) is one of the most important paintings in the collection of the Vancouver Art Gallery.

The Master
Born in England, Jack Leonard Shadbolt (1909-1998) emigrated to British Columbia at the age of three. After studying his craft at the Vancouver School of Art and in London, Paris, and New York, he became an accomplished teacher and writer. During the Second World War, he served overseas as a war artist; service which drastically changed his style of painting. At war"s end, Shadbolt returned to teach at the Vancouver School of Art. In 1988, Shadbolt and his wife, Doris Meisel, created the Vancouver Institute for the Visual Arts, an endeavour which brought painters, curators and architects together to express the beauty of their region.

His Influences
One of Shadbolt's major influences was West Coast artist Emily Carr; he recalls being "dumbstruck by admiration of her." Biographer Scott Watson writes that Shadbolt "came to believe, as did generations of postwar artists in Europe and the Americas, in abstraction as the language of the psyche." Such artists believed that while art had the power to reveal the crisis of the human condition, it also had the power to heal it.

Continuing the Stamp Series
Designer Pierre-Yves Pelletier, who worked on previous issues in the Masterpieces series, continues his efforts with The Space Between Columns #21 (Italian). A special platinum foil frame surrounds the image of Shadbolt's painting.