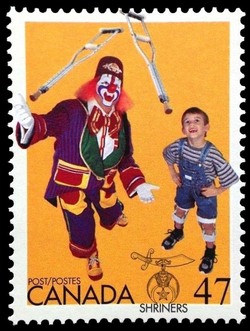 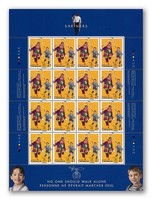 First manufactured in the holy city of Fez, Morocco, the distinctive red fez is an enduring symbol of the Shrine of North America. Equally enduring is their legacy: a network of specialized hospitals that have provided expert orthopaedic and burn care to children - free of charge - for over 75 years. On September 19, 2001, Canada Post will issue a single domestic rate stamp honouring the Shriners.

The Shrine Of North America
In 1872, a group of 13 men belonging to the Masonic Order founded the Shrine of North America. Today, this international fraternity boasts approximately 610,000 members. Established to provide fun and fellowship for its members, the organization now spans the United States, Canada, Mexico, and the Republic of Panama.

The Masonic Order
To become a Shriner, a man must first be a Mason. The fraternity of Freemasonry is the oldest, largest and most widely known fraternity in the world, dating back hundreds of years to when stonemasons and other craftsmen working on the same building project would gather in shelter houses, or lodges. Eventually, formal masonic lodges emerged; its members bound by the desire to be fraternal brothers. Freemasons follow three great principles: brotherly love, relief and truth.

The World's Greatest Philanthropy
Since the earliest days of Freemasonry, Masons have showed concern for the care of orphans, the sick and the aged. As the Shrine of North America grew, its members began dedicating efforts to helping others by establishing an official Shrine philanthropy - a network of specialized hospitals for children with orthopaedic problems. Since the first Shriners Hospital opened in 1922, the Shrine has supported what has come to be known as "the world"s greatest philanthropy."

Shriners Hospital for Children
"No one should have to walk alone." This is the philosophy of Shriners Hospitals, which have treated more than 600,000 children. When the first Shriners Hospital opened in 1922, the foundation was laid for an international pediatric healthcare system boasting some of the first specialized orthopaedic hospitals in North America. In the 1960s, the Shriners built three hospitals dedicated to treating children with severe burns. These hospitals pioneered burn treatments now used worldwide.

Hope, Happiness, And Healing
Designed by Monique Dufour and Sophie Lafortune of Quebec City, the Shriners stamp presents a message of hope, benevolence and community involvement. The clown, used by Shriners in circuses, fundraisers, and as a diversion for children, figures prominently as a helping volunteer. All photography by François LeClair of Montréal.