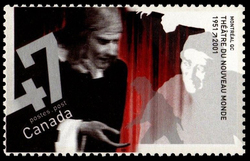 This year, Canada Post is proud to mark the anniversaries of two of Canada's most prestigious theatres: Montréal's Théâtre du Nouveau Monde and London's Grand Theatre.

THÉÂTRE DU NOUVEAU MONDE
In 1951, the Théâtre du Nouveau Monde was born. Six young theatre lovers joined forces to create a cultural institution in the heart of Montréal, one that was founded on the belief that social and political issues could be addressed in a theatrical performance so as to heighten the audience's spirits as well as its awareness. This ensemble of creative artists was so passionate about the theatre, they created a school for aspiring actors and actresses to carry on their work.

A STARRING ROLE
Touring first in Québec, then across Canada and the world, the Théâtre du Nouveau Monde quickly realized its mission to "nationalize and internationalize, stimulate, educate and entertain." Even in its early days, it presented works that were sometimes controversial but always entertaining. The works of Brecht, de Musset, Arthur Miller and Félix-Antoine Savard have kept theatregoers coming back to Théâtre du Nouveau Monde for 50 years, making it a national institution.

THE GRAND THEATRE
In 2001, one of Canada's oldest theatres celebrates a century of artistic excellence. The Grand Theatre (The Grand) in London, Ontario was built in 1901 following the fire that destroyed the Grand Opera House in 1899. Noted for its architecture as well as its stage shows, The Grand Theatre soon became a monument to the performing arts.

STAGE PRESENCE
Not only has it become one of the longest, continual live theatres in Canada, but The Grand has passed many milestones along the way. Aside from being the model for professional regional theatre in Canada, The Grand was instrumental in the production of Canada's first colour feature film in 1941, and has seen many Canadian and international stars walk upon the stage reportedly haunted by the ghost of theatrical entrepreneur Ambrose J. Small. The Grand is celebrating its first century of presenting great musicals, comedies and dramas; imagine what the next one will hold.

ABOUT THE DESIGN
Montréal design firm Graphème and illustrator Marc Serre designed the stamps to celebrate these milestones: "For the Théâtre du Nouveau Monde we focussed on performance," says Graphème's Pierre Léonard, "we wanted to depict the two founders [Jean Gascon and Jean-Louis Roux] in their greatest roles," he adds. For the Grand Theatre, the emphasis was placed on the building. "So we featured its founder Ambrose J. Small, and as his ghost is said to wander the theatre, it adds a touch of historical interest too," concludes Pierre Léonard.