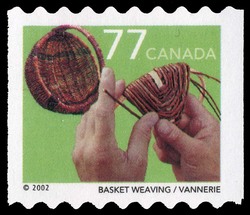 Canada Post will be issuing three mid-value definitives to accompany the eight low-value definitives introduced on April 29, 1999. The new definitives feature the traditional trades of jewellery ($0.65), basket weaving ($0.77), and sculpture ($1.25).

JEWELLERY
Since ancient times, humans have adorned themselves with all manner of jewellery. Materials used for these ornaments range from organic substances such as feathers, wood, shells and leather to inorganic materials such as precious metals, gems, ceramics and minerals. Through the ages, fashions changed, but the skill and patience necessary for the art of jewellery making remains constant.

BASKET WEAVING
The art of basket weaving dates back thousands of years in North America. Baskets were fashioned for functional use from coiled, plaited, twined or woven fibres such as willow, cattails, birchbark or raffia. A lifelong necessity, baskets served as cradles, food gathering containers, food storage containers, ceremonial aids, and as funerary objects. Today, woven baskets are valued as skillfully rendered pieces of art.

SCULPTURE
Sculpture dates from antiquity, and through the ages the art has undergone only minor variations. Carving, modelling and casting methods have been used for millennia to create three-dimensional art from myriad materials, including stone, clay, metal and wood. However, advances in techniques and materials have opened new opportunities for present-day sculptors.

THE STAMP CRAFTERS
Designed by Monique Dufour and Sophie Lafortune of Quebec City, these three mid-value definitives pay tribute to the creative force of artisans who ply a traditional trade. The stamps were produced with computer graphics to assemble the elements into an attractive graphic creation. The main focus of each stamp is the artisan's hand in relation to the raw material; the creation of art through working directly with the substance. All photography was done by Richard Robitaille of Durham, Quebec, in the studios of the artisans. Featured in the jewellery issue ($0.65), the basket weaving issue ($0.77), and the sculpture issue ($1.25) are the hands of (respectively) Dennis Tkachuk of Milden, Saskatchewan; Anne Sportun of Toronto, Ontario; and Simon Dick of Vancouver, British Columbia. All three stamps are available in coils of 50, and the international rate and U.S. rate stamps are available in booklets of six.

Designed by Monique Dufour. Designed by Sophie Lafortune. Based on photographs by Richard Robitaille.