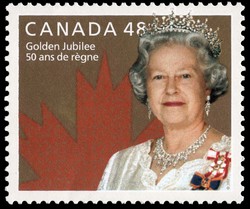 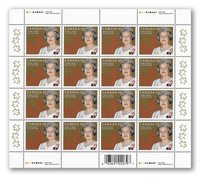 Joining the ranks of Queen Victoria, Henry III and George III, Her Majesty Queen Elizabeth II will be the fifth British monarch to celebrate a golden jubilee. To mark this momentous occasion, Canada Post has issued a single domestic rate commemorative stamp.

The Early Days
Her Majesty the Queen was born Elizabeth Alexandra Mary on April 21, 1926 in London, England. She was the first child of the Duke and Duchess of York, who became King George VI and Queen Elizabeth in 1936. Princess Elizabeth's sister Margaret was born four years later and the two princesses received their early education at home. Studies included art, music, and constitutional history and law. As the heiress presumptive grew older, she began to assume more of a public role, and at age 14 she gave her first broadcast message, delivered during a children's program on the BBC. Shortly after her 18th birthday, Princess Elizabeth was appointed a Counsellor of State, and it was then that she first exercised functions of the Crown.

Growing Responsibilities
After the war, Princess Elizabeth's public engagements grew in frequency. In 1947, she took her first official visit overseas when the Royal Family toured southern Africa. Shortly after their return, Princess Elizabeth announced her engagement to Lieutenant Philip Mountbatten (now His Royal Highness the Prince Philip, Duke of Edinburgh), and their wedding took place in Westminster Abbey on November 20, 1947. In 1948, Princess Elizabeth bore her first child, Prince Charles (now the Prince of Wales and heir to the throne). Her second child, Princess Anne (now the Princess Royal) was born in 1950, and her third, Prince Andrew (now the Duke of York), was born in 1960. Prince Edward (Earl of Wessex), the couple's fourth child, was born in 1964.

Ascension to the Throne
In 1952, illness prevented King George VI from carrying out a visit to Australia and New Zealand. Princess Elizabeth took his place. It was during this visit that the Princess learned of her father's death and her own ascension to the throne. Her Majesty's coronation took place in Westminster Abbey on June 2, 1953, with prime ministers from Commonwealth countries and representatives of foreign states in attendance. For the first time in history, television brought the coronation of a British monarchy into the homes of thousands around the world.

A Design to Celebrate
Designed by Gottschalk + Ash International, this commemorative stamp features two images - the maple leaf, a traditional symbol of Canada, and the Queen. The design is meant to symbolize Canada's support and best wishes to Her Majesty on this special occasion.