The hidden date for this stamp can be found near the horse's tail. The image of the horse is embossed onto the stamp. The middle perforation along the vertical edge of the stamp is diamond-shaped. 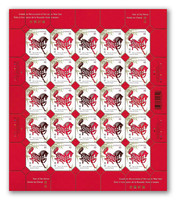 With the arrival of the new moon on February 12, 2002, a new year will commence for millions of people in Asia and around the world. It is the Year of the Horse, the seventh year in a repeating twelve-year cycle. This year ends on January 31, 2003, giving way to a new year and a new presiding animal in the ancient zodiac. The most celebrated of all Chinese festivities, the lunar new year is a time of gathering, feasting, renewing and celebrating. Canada Post joins all Asian-Canadians in paying homage to these traditional festivities with one domestic rate stamp and one international rate stamp, both issued on January 3, 2002.

THE CHINESE LUNAR CALENDAR
Used as early as 2637 BC, the lunar calendar is the oldest chronological record in the world. As its name suggests, the lunar calendar is based on the orbit of the moon - unlike the Western solar calendar which tracks the movement of the earth around the sun. In the lunar calendar, the second new moon following the winter solstice marks the beginning of a new lunar year, and each year is named after one of twelve animals in a repeating twelve-year cycle. According to one legend, Buddha invited the entire animal kingdom to assist him in restoring order to the world. Of all the animals summoned, only twelve appeared. These beasts came to represent the Chinese zodiac, with each animal ruling one of the twelve years. It is said that each year possesses the characteristics of the presiding animal and traditionally, an individual's character, personality and fortune can be determined by the animal presiding over the year of his or her birth.

THE HORSE IN ASIAN ART
Horses are symbols of vitality, progress, and speed towards success. This majestic animal often appears on New Year greeting cards, lucky money envelopes, birthday cards and wedding cards. It is believed that horses bring wishes of prosperity and health to the recipient of such correspondence. In Asian art, horses connote force and strength, and are portrayed as lively, energetic and powerful. Horses are usually in motion, whether travelling in a herd or participating in a battle. Horses are always depicted in an upright position.

CHARACTERISTICS OF A HORSE PERSON
Those born under the sign of the horse possess a distinctive set of characteristics unique to the sign. Typically cheerful, the horse is popular, quick-witted, perceptive and talkative. Horses are noted for their self-reliance, sense of adventure, vivaciousness, and ability to manage money. Open-minded and flexible, the horse loves fanfare. But with these strengths come the weaknesses of being impulsive, stubborn, headstrong and temperamental. The horse's changeable nature often leads to irrational or hot-tempered behaviour and the inability to follow schedules or demonstrate perseverance. Self-centred by nature, the horse will demand much from others but give little in return.
One's personality traits are not dictated by sign alone - the time of day and the season of one's birth are also influential factors. It is believed that a horse born during the summer will fare better in life than a horse born during the winter. Typically, the best stage of a horse's life is at middle-age, when they are mature and can accept responsibilities. Some famous people born under the sign of the horse are Theodore Roosevelt, Nelson Mendela, and Paul McCartney.

THE YEAR 2002
Each year belongs to one of the five elements of the universe - gold/metal, wood, water, fire, or earth - and these elements have an influence on all born during that year. The year 2002 belongs to the element water, and people born this year are called water horses. It is believed that water horses are cheerful, fun to be with, and highly adaptable to change. They possess a great sense of humour and excellent business acumen. However, water horses are more restless than other horses, due to being extremely concerned with their well-being, status, and comfort. Water horses are prone to changing their minds abruptly, and their decisions are sometimes guided by bursts of nervous energy.

COLOURFUL DESIGNS
Art director Carey George of Up Inc. of Toronto chose bright red as the dominant colour of the domestic rate and international rate Lunar New Year commemorative stamps. Traditionally, red is one of the main colours used in New Year celebrations. Gold, which is symbolic of superiority, is used on the souvenir sheet. Illustrator Dao-Yan (David) Hu selected a coin pattern as the background of both the stamp pane and the souvenir sheet, as coins have traditionally been an emblem of wealth and prosperity in the Chinese culture. A facsimile of a papercut in the shape of a horse brings to mind the Chinese tradition of decorating windows with these skillfully rendered ornaments during celebrations. The peach blossom on the $1.25 stamp was chosen as a design element because it is the flower of the second month (February), and is used as a charm against evil. Bamboo leaves, seen in the background of the 48 cent stamp, are a symbol for longevity, virtue and constancy.