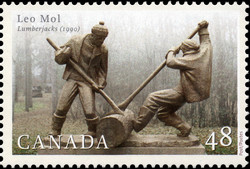 LEO MOL
Leonid Molodoshanin, known as Leo Mol, was born in Ukraine in 1915, and learned the art of ceramics in his father's pottery workshop. He immigrated to Canada in 1948, held his first ceramics exhibition in Winnipeg in 1949, and quickly became known for his figures of square dancers, skiers, aboriginals, and wildlife. Mol also completed more than 80 stained-glass windows in churches throughout Winnipeg.

THE LEO MOL SCULPTURE GARDEN
Spanning about 1.2 hectares in Assiniboine Park, the Leo Mol Sculpture Garden was officially opened on June 18, 1992. The Garden and gallery came into being when Mol donated more than 200 bronze sculptures to the city of Winnipeg. The sculptures represent: religious leaders, prominent people, the human form, and wildlife. The immaculately landscaped park has won several awards and comprises a gallery, a renovated studio, and an outdoor display which can be viewed year-round by the public.

LUMBERJACKS
Long fascinated by the strength, skill and endurance of loggers, Mol began a small bronze sculpture of lumberjacks in 1978. This sculpture was inspiration for a monumental bronze sculpture, completed in 1990, which now stands in Assiniboine Park.

CREATING THE STAMPS
Designed by Suzanne Morin of Outrement, Quebec, the stamps focus on the sculptures themselves, with simple graphic support. The main design challenge, says Ms. Morin, was in creating a visual link between two very different sculptures. Through commissioning one photographer (François Brunelle) to shoot both sculptures with similar lighting, framing and point-of-view, this challenge was overcome. To further link the images, the photos were digitally re-touched, softening two dissimilar backgrounds.