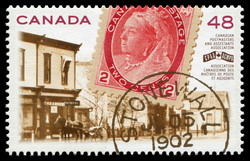 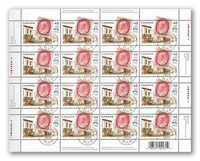 What started as a local grassroots organization dedicated to improving the working conditions of postmasters in rural Manitoba has grown to become a national organization that is now the second-largest bargaining unit representing employees of Canada Post Corporation. To commemorate the 100th anniversary of the Canadian Postmasters and Assistants Association, Canada Post will issue a single domestic rate stamp, which will be available in a pane of 16.

History of the Association
The Canadian Postmasters and Assistants Association (CPAA) was founded in 1902 in Stonewall, Manitoba. Stonewall's first post office was opened on August 1st, 1878, with Ira Stratton becoming postmaster in 1897. Stratton, who served as postmaster until 1905, became increasingly frustrated with his situation. He was expected to pay for his office rent, heat, light, supplies, and any extra help. The hours were long, and he worked without time off. In July of 1902, a fed-up Stratton met with colleague D.H. McLean in nearby Emerson, Manitoba, and discovered that McLean had similar problems. They called a meeting of postmasters from the surrounding area, which led to the formation of The Manitoba and Northwest Accounting Postmasters' Association. Stratton presented a petition, signed by 100 postmasters, to Postmaster General William Mulock, which led to a 10% salary increase - the association's first victory.

Growth
The Association grew to include six provinces by 1906 and by 1910, all nine provinces were included. After the Second World War, postmasters became full-time staff and received civil service benefits of sick leave, vacation, and superannuation. In 1968, the Association was granted collective bargaining rights. This association became the CPAA in 1978.

History Meets Design
Designer Chris Candlish of Cambridge, Ontario took a historical approach to the design of this stamp. The Provincial Archives of Manitoba provided a black-and-white photo (taken c1910) of the Stonewall post office managed by Stratton, to which Candlish added sepia toning. He also added a reproduction of an original 2¢ Queen Victoria carmine stamp, which was used for the domestic 1st class rate and Empire rate in 1902, and a cancellation showing the date 'JL 06 1902,' the date Stratton met with McLean. The CPAA logo is also featured. The unique layout of the 16-stamp pane includes three 8 mm gutters and a 16 mm inscription forming the selvedge. The top left corner of the 2¢ stamp blends with the top inscription and into the three gutters.