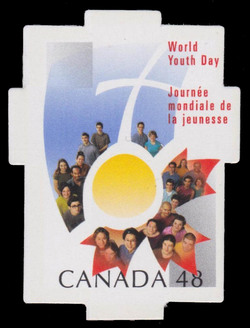 As host of the 17th World Youth Day, Toronto can expect to see Pope John Paul II and hundreds of thousands of youth from around the world gather for a celebration of the Catholic faith. Special events and activities will be held at Exhibition Place, University Avenue and Downsview Lands. Canada Post commemorates World Youth Day 2002 with a single domestic rate self-adhesive stamp, available in a booklet of 8.

World Youth Day
World Youth Day (WYD) has been celebrated each year since 1986. It was the initiative of Pope John Paul II after the 1984 Jubilee of Young People and the 1985 gathering for the International Year of Youth in Rome. WYD is celebrated on Palm Sunday each year, and there is a large international gathering of Catholic youth every second year, which is usually held during the summer.

WYD 2002 Events
Between July 18th and 21st, Canadian Catholics throughout the country will welcome young Catholics from abroad into their homes, parishes and communities. The first part of WYD is the 'Days in the Dioceses,' and during this time, Canadians and their visitors will participate in masses, pilgrimages and prayer while reaching out to people in the community. On the 22nd of July, participants are scheduled to arrive in the Toronto area. The following day will see the Archbishop of Toronto presiding at the Opening Mass of Welcome. On July 25th, the Pope will be welcomed at Exhibition Place and Way of the Cross ceremonies will proceed on the 26th. A walking pilgrimage to Downsview Lands and an evening vigil with the Pope will take place on the 27th, and a Papal Mass on Sunday the 28th will conclude WYD 2002.

The WYD Cross
At the Jubilee of the Redemption in 1984, the Pope gave a simple wooden cross to the youth of the world to carry as a symbol of their faith. Made of two planks of wood, the cross weighs 31 kilograms and measures 3.8 metres by 1.75 metres. The cross "is the way of life and salvation," Pope John Paul II said, and it will be taken "on its pilgrimage along the roads of the world." On Palm Sunday of 2001, the Pope presented the cross to a delegation of young Canadians during a mass in St. Peter's Square. It was brought to Canada in April 2001 where it began a 15-month trip to every diocese in the nation. During the final months of travel before WYD begins, the cross will be carried by foot from Montréal to Toronto. Way of the Cross ceremonies will take place on University Avenue.

A Glorious Design
The World Youth Day commemorative stamp was designed by Lise Giguère of Montréal, with photography by François Brunelle. In designing this stamp, Giguère faced the challenge of incorporating the WYD logo into the stamp without compromising the aesthetic qualities of the logo and while maintaining the religious atmosphere of the event. The prominent logo consists of four elements to symbolize the location, participants and spirit of this international event. The cross symbolizes the presence of Jesus Christ and has a shape similar to the Pope's pastoral staff. A yellow circle represents the attending youth, while the blue section represents the oceans and waters of Canada. The three open sides symbolize the oceans bordering Canada - Pacific on the west, Atlantic on the east, and Arctic to the north. The maple leaf is Canada's national symbol and is representative of the kindness and hospitality foreign guests will receive.