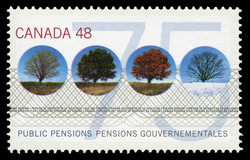 The hidden date for this stamp can be found in the summer picture of the tree. Canada's social security plans didn't always exist. Retired or aged Canadians looked to their families for support, with the poorhouse as the alternative. It was 75 years ago, in 1927, that Canada's first Old Age Pensions Act was passed, which led to the introduction of several public pension programs. Canada Post marks the occasion with the issue of a single domestic rate stamp, available in a pane of 16.

Early Advocates
Labour Party members James S. Woodsworth (1874-1942) and Abraham A. Heaps (1885-1954), both from Winnipeg, were strong advocates of unemployment insurance and old age pensions when neither existed in Canada. When Prime Minister William Lyon Mackenzie King (1874-1950) failed to secure a majority in the House of Commons during the 1925 election, Woodsworth and Heaps offered King their support in return for King's promise to introduce legislation leading to old age pensions. The result was the Old Age Pensions Act of 1927. Provincial participation in this plan was optional. British Columbia joined immediately, but it wasn't until 1929 that residents of Ontario, Manitoba, Saskatchewan and Alberta became eligible. All nine provinces were in the plan by 1936.

The First Old Age Pensions
With the 1927 Old Age Pensions Act, British subjects, aged 70 or older, who had lived in Canada for 20 years were eligible to receive a maximum pension of $20 per month, provided their income (including pension benefits) was less than $365 per year. The Old Age Security Act, which took effect in 1952, offered $480 per year without a means test to Canadians aged 70 or older who had lived in Canada for at least 20 years. The Guaranteed Income Supplement payments (GIS) were started in 1967 to supplement the income of certain OAS pensioners. The Canada Pension Plan (CPP) and the Quebec Pension Plan (QPP), which came into effect in 1966, were 'contributory' programs that provided retirement income plus death, survivor, and disability benefits. Public pensions have changed or been augmented over the years, lowering the age of eligibility, liberalizing residency requirements, and expanding to include Aboriginals. The programs also recognize common-law spouses and same-sex relationships.

Metaphor in Design
Designer Debbie Adams chose to use a tree as a metaphor for the human lifespan. By representing the four seasons, this tree reminds us of the passage of time - specifically, how the seasons mirror our life stages. In the 'spring' and 'summer' of our lives, we contribute to pensions, and in the 'fall' and 'winter' of our lives, we receive compensation. The curlicue linear graphic is reminiscent of the pattern on currency and cheques, and connotes the payment into and receipt of public pension funds.