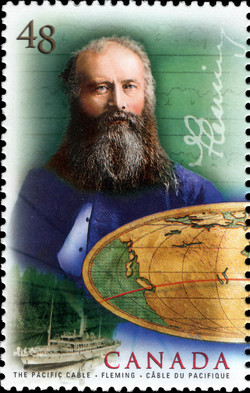 With the issue of a se-tenant pair of domestic rate ($0.48) stamps, Canada Post honours two significant events in the history of communications technology - on October 31, 1902, the Pacific Cable was opened, and on December 15th of the same year, Guglielmo Marconi sent the first radio message across the Atlantic Ocean, from Glace Bay, Nova Scotia, to Poldhu, England. The two stamps appear together in a pane of 16.

Pacific Cable Board
Sir Sandford Fleming (1827-1915) immigrated to Canada in 1845 and became one of our greatest railway surveyors and engineers. His 1879 proposal of an 'all-British' expanded telegraph route was agreed upon eventually and construction began on the line, which ran from the west coast of Vancouver Island across the ocean floor to the first relay station on Fanning Island, on to Fiji, Norfolk Island, Southport (Australia) and Auckland (New Zealand). This enterprise operated under the name Pacific Cable Board. Bamfield (on the west side of Vancouver Island) was chosen as the ideal location for the cable station. The station was officially opened on October 31, 1902, and on the very next day the first 'world-circulating telegraph message' was delivered to Lord Minto, the Governor General of Canada, after circling the globe.

Trans-atlantic radio message
Born in Bologna, Italy, Guglielmo Marconi (1874-1937) is known for his pioneering work in radio (originally called 'radiotelegraphy,' 'wireless telegraphy,' or 'wireless'). In 1902, the 'Wizard of Wireless' built a station in Glace Bay, NS, on the cliffs overlooking the Atlantic at Table Head.

Four wooden 200-foot-high latticework towers were arranged in a square, and it was from here on December 15th that the first trans-Atlantic radio message was transmitted to Poldhu, England. Marconi built a newer, more powerful station farther inland in 1905 at a location known since as Marconi Towers. Today, at Table Head, the Marconi National Historic Site displays photographs, artifacts and models detailing Marconi's life and work.

Coast-to-Coast Design
Featured on the right-hand Communications stamp is a portrait of Marconi in 1896 complimented by a postcard picture of Marconi Wireless Station in Glace Bay and Marconi's signature; and featured on the left-hand stamp is a portrait of Fleming surrounded by the cable ship Iris at Bamfield and Fleming's signature. Designer Susan Warr of Halifax positioned Marconi on the right, or Atlantic side, and Fleming on the left, or Pacific side, with a red line (reminiscent of the map-colour of the British Empire) joining the two. Bonnie Ross created the stylized map of Canada.

Based on an illustration by Bonnie Ross. Based on a photograph by William James Topley.