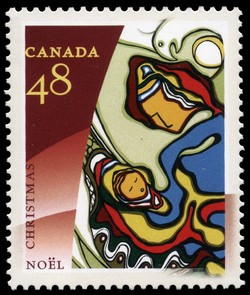 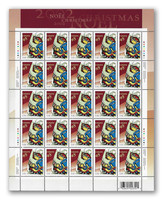 Canada Post celebrates the season with a special set of three Christmas stamps displaying the works of three Canadian aboriginal artists. Featured are Genesis by Daphne Odjig on the domestic rate ($0.48) stamp; Winter Travel by Cecil Youngfox on the U.S. rate ($0.65) stamp; and Mary and Child by Irene Katak Angutitaq on the international rate ($1.25) stamp. The domestic rate stamp is available in a booklet of 10 or a pane of 25, and the U.S. and international rate stamps are available separately in booklets of six or panes of 25.

Daphne Odjig
Born in 1919 on the Wikwemikong Reserve on Manitoulin Island, ON, Daphne Odjig was the daughter of a Potawatomi father and an English mother. Odjig recalled that her father loved to draw and paint, and that her mother used to embroider. She would watch her grandfather, a tombstone carver, create beautiful lettering with his chisel. Odjig grew up surrounded by art.

In 1938, Odjig left the reserve for Toronto, where she became a wartime worker in the Inglis plant. She soon discovered the city's art galleries and libraries, where she perused books on art. After the war, Odjig and her husband opened an art gallery in Winnipeg. It was the first Canadian art gallery dedicated to aboriginal art, and it became a magnet for a group of artists that eventually became known as the 'Indian Group of Seven.'

In 1978, Odjig was commissioned by Ottawa's National Museum of Man to paint the historical mural entitled The Indian in Transition. This honour was one in a series that recognized and celebrated Odjig's talents as an artist. In 1986, she was made a member of the Order of Canada due to her great innovation and ability to work in a number of mediums and her being a central figure in the development of Native art in Canada. Odjig was elected to the Royal Canadian Academy of Arts, and has received honorary degrees from Laurentian, Toronto, and Nipissing. Furthermore, she was granted an Aboriginal Achievement Award and was given an eagle feather by the chief of the Wikwemikong Reserve, an honour formerly reserved for great hunters and warriors.

Genesis
Genesis is a highly stylized 'Mary and Child' painting rendered in Odjig's own style, which combines elements of cubism and surrealism with an aboriginal world view. Phillip Gevik of Toronto's Gallery Gevik calls the work "a great choice… [which displays] a kind and warm sentiment… a suitable theme for Christmas."

A Warm Design
Signals Design Group Inc. of Vancouver created this three-stamp set. Design principal Kosta (Gus) Tsetsekas says that the primary objective was to create a design that would lend visual support to the artwork but let the paintings and sculpture feature prominently. This objective was met by using complementary colours, unobtrusive typography, and a background style that simultaneously reflects the coolness of winter and the warmth of the holidays.

Keith Hamilton and Bernice Alderson were the designers of the Aboriginal Art Christmas stamp set, which features Mike Macri's photograph of the Mary and Child carving.