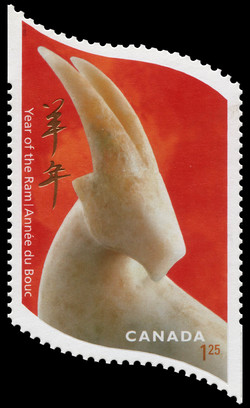 The image of the ram is embossed onto the stamp. The perforation has a straight-cut section. 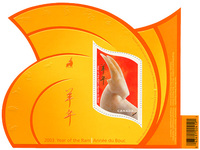 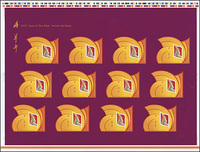 Excitement is building as Chinese communities get ready to usher in the Year of the Ram, commencing February 1st, 2003 and ending January 21st, 2004. Preparations begin as early as a month before the new year, with people spending lavishly on presents, decorations, food and clothing. Family members busily plan for a family reunion. Houses are cleaned from top to bottom in hopes of sweeping away ill fortune and making way for good luck. Doors and windows are decorated with lucky words such as 'happiness,' 'wealth,' 'longevity,' and 'fruitful marriage.' Canada Post proudly celebrates the Year of the Ram with the issue of a domestic rate ($0.48) stamp, available in a pane of 25, and a souvenir sheet of one ($1.25) international rate stamp.

The Ancient Lunar Calendar
Based on exact astronomical observations of the longitude of the sun and the phases of the moon, a traditional lunar calendar is of a 60-year cycle, with each year divided into 12 months of either 29 or 30 days. As the name suggests, a lunar month begins with the new moon. The beginning of a new year is calculated according to the second new moon following the winter solstice, and can fall anywhere from mid-January to mid-February. Although the Chinese have adopted the Gregorian calendar of the West, the lunar calendar is important for determining festivals and is a useful tool for farmers deciding the proper time for planting and harvesting. The calendar is based on a 12-year cycle, with each year named after a particular animal in the Chinese zodiac.

The Tale of Nian
Several explanations of the lunar new year's origin exist. It is commonly agreed that the word Nian, which means 'year' in modern Chinese, was originally the name of a beast that preyed on people the night before the beginning of a new year. The tradition of observing the conquest of Nian has been passed from generation to generation and includes a number of customs and practices. Putting up red paper and setting off firecrackers to scare away the monster still persists today.

New Year Traditions
The eve of the new year is carefully observed; supper is a feast, with all family members attending. Afterwards, the family will play games together and watch the sky light up with firecrackers and fireworks at midnight. The atmosphere is charged with excitement. The following morning, children receive money in special red pockets, and the next several days are filled with reconciliation and visiting friends to exchange gifts. The Festival of Lanterns, an occasion of lantern shows, lion and dragon dances, and festive parades, takes place on the 15th day of the celebrations.

The Ram
Because rams are usually seen as animals that bring good luck, they're used in many festivals and celebrations. In some places, such as Mongolia, they are customarily given as gifts to teens becoming adults, as they are a symbol of goodness and long life. Sheep are also given as engagement or wedding gifts, and are used as the main course in banquets. Lamb's wool is seen as top-quality material for clothing, worn by emperors in days gone by. It was also worn by officials during meetings with the emperor, as it was associated with the calm, uncorrupted and benevolent nature of the ram.

The Ram Characteristics
People born in the Year of the Ram are believed to be elegant, creative, and highly accomplished in the arts. They're also sensitive, romantic dreamers, often shy, pessimistic and puzzled about life. Usually deeply religious and timid by nature, rams are often awkward in speech but passionate about what they do and believe in. It is said that those born under this sign need never worry about having the best in life, as their abilities allow them to make enough money to obtain the comforts they enjoy.

A Celebration in Design
This is the first stamp project for Three Degrees Creative in Vancouver. Rosina Li, Chris Reid, and Jason Li bring a collective wealth of formal design training and skills in traditional fine arts to this creative endeavour, which features two original sculptures by Reid. Rosina Li explains that there is no distinction between sheep and goats in Chinese; hence the two different sculptures. To both complement and contrast the soft, stylized shapes of the sculptures, bright-red and golden-orange (traditional colours of the New Year) are used in the background together with special foil stamping and embossing treatment on each stamp design. The textures emulate flowing silk, an effect enhanced by soft illumination during the photo shoot with Raeff Miles of Vancouver. This lighting created a feel of tranquility and calmness - characteristics associated with the ram. On both the stamps and souvenir sheet, the Chinese characters on the left read 'Year of the Ram.'