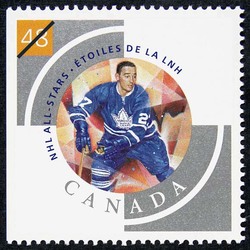 Frank Mahovlich
Six-time Stanley Cup champion Frank Mahovlich was hailed as a future superstar while still in junior hockey. He joined the Toronto Maple Leafs full time in 1957-58 and beat Bobby Hull to win the Calder Trophy for rookie of the year. Mahovlich was one of the greatest goal scorers in hockey, leading the Leafs in scoring every season between 1960-61 and 1965-66. He was the main offensive weapon on Leaf teams that won the Stanley Cup in '62, '63, '64 and '67, and he was named to either the First or the Second NHL All-Star Team a total of nine times. In March of 1968, Mahovlich was traded to the Detroit Red Wings, with whom he established his career high of 49 goals in 1968-69. Come 1971, he was traded to the Montréal Canadiens, where he was a key part of two Stanley Cup wins. Mahovlich was inducted into the Hockey Hall of Fame in 1981.