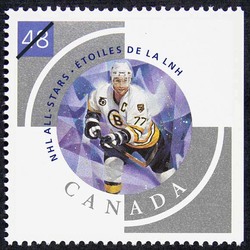 Raymond Bourque
Five-time Norris Trophy winner Raymond Bourque is the only non-goaltender in NHL history to win the Calder Trophy as rookie of the year and earn a spot on the First All-Star Team in his first season in the league. From his 1979-80 start with the Boston Bruins, Bourque went on to earn selections to either the First or Second All-Star Team in each of his first 17 seasons. In all, he earned 19 All-Star selections including a record-breaking 13 to the First Team. Bourque spent most of his 22-year career with the Bruins, and is the club's all-time leader in assists (1,111) and points (1,506). He became the first defenceman to top 400 goals and led the Bruins in scoring five times, ranking consistently among top-scoring league defencemen throughout his career.