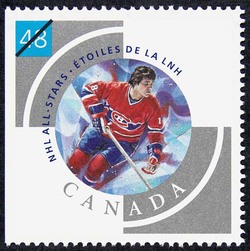 Serge Savard
During the 15 seasons Serge Savard played with the Montréal Canadiens, the team won eight Stanley Cup championships. With his agility and solid defensive skills, 'The Senator' was a key player in the team's success through the late 1960s and 1970s. Savard joined the Canadiens full time in 1967-68 and played for his first Stanley Cup winner that year, then became the first defenceman to win the Conn Smythe Trophy as playoff MVP when Montréal repeated as champions in 1969. During the 1970s, Savard helped the Canadiens win the Stanley Cup four times in a row, and in 1979, he won the Bill Masterton Trophy for his perseverance and dedication to hockey. After spending two seasons with the Winnipeg Jets, Savard was named managing director of the Canadiens in 1983. He was inducted into the Hockey Hall of Fame in 1986.