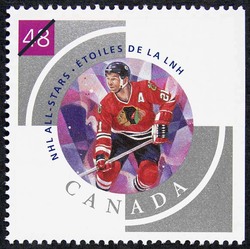 Stan Mikita
Tiny, talented and tough, Stan Mikita was one of the greatest players in NHL history over a 22-year career (1958-1980) with the Chicago Blackhawks. Upon retirement, Mikita ranked second all-time behind Gordie Howe with 926 assists, sixth in goals with 541, and third in points with 1,467. Not only was Mikita the 1963-64 winner of the Art Ross Trophy as the league's leading scorer, he was among the league leaders in penalty minutes. He resolved to clean up his play, and in 1966-67 became the first NHL player to win three major awards in one season: the Art Ross Trophy (scoring), the Hart Trophy (MVP), and the Lady Byng Trophy for sportsmanship. He repeated this feat the very next season. Mikita received the Lester Patrick Trophy in 1976 for his contributions to hockey in the U.S., and was inducted into the Hockey Hall of Fame in 1983.