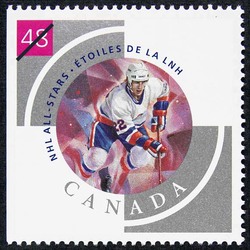 Mike Bossy
The highest scorer in the history of Canadian junior hockey, Montréal native Mike Bossy was placed on the New York Islanders' top line as a rookie in 1977-78. He won the Calder Trophy after setting a rookie scoring record of 53 goals, and went on to score 50 goals for nine straight seasons. He was the first player in Islanders history to reach 500 goals and 1,000 points, and was a major factor in the team's four consecutive Stanley Cup wins from 1980 to 1983. Bossy won the Conn Smythe Trophy as playoff MVP in 1982 and the Lady Byng Trophy for sportsmanship in 1983, 1984 and 1986. For the first eight seasons of his career, he was selected as an NHL All-Star at right wing: five times to the First Team, and three times to the Second. Bossy was inducted into the Hockey Hall of Fame in 1991.