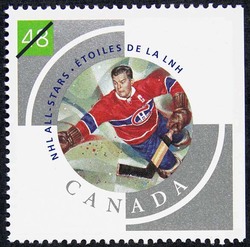 Bill Durnan
Toronto-born ambidextrous goaltender Bill Durnan had a long career as an amateur before he turned pro. He entered the NHL as a 27-year-old rookie with the Montréal Canadiens in 1943-44, and spent just seven years in the league. During that time, Durnan won the Vezina Trophy as the league's top goalie six times, was selected to the First All-Star Team on six occasions, and helped his team win the Stanley Cup title two times. Durnan, who trained himself to memorize the habits of the game's best players, set a modern NHL record in 1948-49 when he went unscored upon for 309 minutes and 21 seconds, including four shutout games. Durnan was inducted into the Hockey Hall of Fame in 1964.