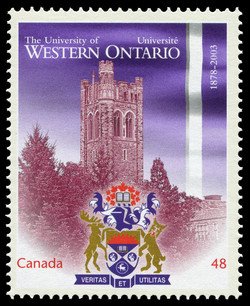 The hidden date for this stamp can be found near the right edge of the stamp. The University of Western Ontario has long enjoyed a reputation for academic and research excellence. On March 19, 2003, Canada Post marks the 125th anniversary of this esteemed institution with a single domestic rate ($0.48) stamp, available to collectors in a booklet of 8.

Founding
On March 7, 1878, The Western University of London, Ontario was officially incorporated. Isaac Hellmuth, the Anglican Bishop of Huron, petitioned for the school, and for 30 years it operated as a church university without funding assistance from the province. In 1908, the City of London assumed financial responsibility for the university, and Western became a secular institution. Come 1923, a name change saw the school assume its present designation, University of Western Ontario.

When classes began in 1881, seven students enrolled and the faculty consisted of four professors and eight lecturers. The first two buildings were the Arts Building (now University College) and the Science Building (now Physics and Astronomy). The most recognizable structure is Middlesex Memorial Tower, which was constructed in 1926 in honour of those from Middlesex County who died in the First World War. Western's McIntosh Memorial Art Gallery, opened in 1942, is now the oldest university gallery in Canada.

Today's Western
The University of Western Ontario (UWO) is located on 155 hectares of land along the banks of the Thames River in London, Ontario. Its student body numbers almost 25,000 undergraduate and graduate students, while faculty is close to 1,200. Through its 12 faculties and schools and three affiliated colleges, Western offers more than 50 different degree and diploma programs.

Western is one of Canada's top 10 medical and scientific research universities, and is widely known for its policy studies in social science and business. The Financial Times has ranked Western's Richard Ivey School of Business among the world's top 20 business schools for both its MBA and Executive Education programs. The Wall Street Journal ranked it number one in Canada and among the top 50 business schools worldwide.

A strong tradition of athletic excellence has continued since J.W. Little Memorial Stadium was built in 1929 and was recently replaced by the new TD Waterhouse Stadium, which played host to the 2001 Canada Summer Games. Over the years, Western has won numerous titles in various sports, from football and hockey to track and field and women's basketball. Olympic rowers Marnie McBean and Silken Laumann are just a few of many Western athletes who have gone on to excel in international and professional sport.

About the Stamp's Design
The UWO stamp is one in a series of six university stamps designed by Denis L'Allier of Montreal. These stamps share several common elements: the school colours, a campus building or landmark, the institution's coat-of-arms, and a tassel. Featured on this stamp is Middlesex Memorial Tower, a structure often referred to as "University College Tower." L'Allier's stamp credits include Public Service International World Congress (2002), Summit of the Americas (2001), Petro-Canada (2000), and Weather Observing (1990).